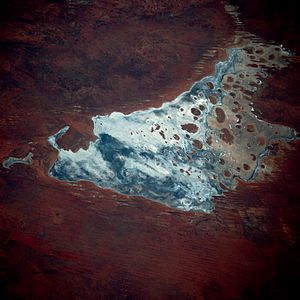 Photograph of Lake Mackay. Taken from space in November 1989.

Lake Mackay (Pintupi: Wilkinkarra) is a large salt lake in central Australia. It stretches across the border between Western Australia and the Northern Territory. All around it is desert. The Great Sandy Desert is to the northwest, the Tanami Desert is to the northeast, and the Gibson Desert is to the south. There are hundreds of salt lakes along this border area, and Lake Mackay is the largest. It has a surface area of 3,494 square kilometres (1,349 sq mi), and is about 100 km (62 mi) long from east to west and north to south. It is the second-largest lake in Australia.

The lake was named after the first European to visit it, Donald George Mackay. The lake is most often dry, because of quick evaporation. Salt and other minerals float on the surface.

Lake Mackay is a central place in dreamtime stories for several Aboriginal groups, especially the Pintupi. The lake forms the centre of the Pintupi ancestral lands. Many sacred paths and tracks come together at the shores of the lake. According to mythology, the lake was formed after a fierce bushfire that ruined the land around it.

All content from Kiddle encyclopedia articles (including the article images and facts) can be freely used under Attribution-ShareAlike license, unless stated otherwise. Cite this article:
Lake Mackay Facts for Kids. Kiddle Encyclopedia.