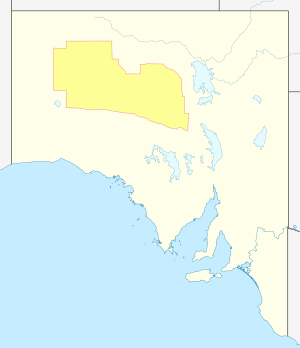 Map of the facility, across the centre of South Australia.

The RAAF Woomera Test Range is a weapons testing facility in South Australia. It is run by the Royal Australian Air Force (RAAF). It covers and area of 127,000 square kilometres (49,000 sq mi), and is the world's largest weapons test facility on land. The range is a restricted area, called the Woomera Prohibited Area. The airspace above it is also restricted, and is called the Woomera Restricted Airspace.

The range was originally set up as a place for the British to test missiles during World War II. The British asked to do weapons testing here (in the centre of Australia), because not many people lived there. A Commonwealth weapons design and test project, called the Australian-Anglo Joint Project, was signed in 1946. The range originally had an area of 270,000 km2 (100,000 sq mi).

Between 1955 and 1963, the British ran a series of seven nuclear-weapon tests at Maralinga, then inside the range. The Joint Project ran until 1980, when the British withdrew from the program. The range is still used as a testing site by the Australian Defence Force. Access is leased to foreign militaries and private companies for their own testing of weapons.

It is named after the Dharuk word for a spear-thrower.

All content from Kiddle encyclopedia articles (including the article images and facts) can be freely used under Attribution-ShareAlike license, unless stated otherwise. Cite this article:
Woomera Test Range Facts for Kids. Kiddle Encyclopedia.