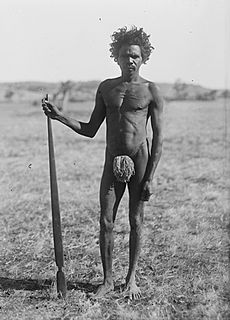 A Wadaman man from the Northern Territory holding a spear-thrower.

A spear thrower is a wooden tool used for throwing spears. It gives the human arm more leverage to build up the spear's velocity. This gives the spear more force and makes it go faster. Spear throwers were used in many civilisations. It was used by the Aztecs, who called it an atlatl. It is also used by Aboriginals in Australia, where it has become most widely known as a woomera (the Dharuk name for it).

All content from Kiddle encyclopedia articles (including the article images and facts) can be freely used under Attribution-ShareAlike license, unless stated otherwise. Cite this article:
Spear-thrower Facts for Kids. Kiddle Encyclopedia.