Kids Encyclopedia Facts
This page is about the river in Western Australia. For the river in Alaska, see Canning River (Alaska).

The Canning River (Djarlgarra in Nyungar) is a major tributary of the Swan River in the South-West Land Division of Western Australia.

With headwaters on the Darling Scarp, the Canning meanders through suburbs of Perth, Western Australia on the Swan Coastal Plain, including Cannington, Thornlie, Riverton, Shelley, Rossmoyne and Mount Pleasant, before joining the Swan at Melville Water just downstream of the Canning Bridge. 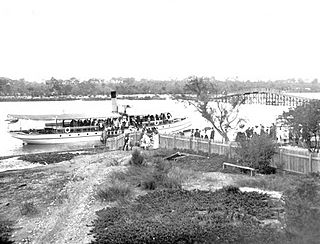 Passengers leaving the Silver Star river steamer ferry at Coffee Point (site of the South of Perth Yacht Club), with the old Canning Bridge in the background. c. 1906. 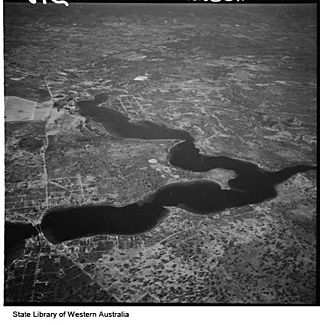 The first European contact was in 1801 when a French exploring party spotted the mouth. The crew subsequently named the mouth Entrée Moreau after Charles Moreau, a midshipman with the party.

The Canning River received its contemporary name in 1827 when Captain James Stirling aboard HMS Success following an examination of the region in March 1827 named the river after George Canning, an eminent British statesman who was Prime Minister of Great Britain at the time and whose government facilitated the funds for the expedition.

In November 1829, just five months after the founding of the Swan River Colony in Western Australia, an exploring party led by now Governor James Stirling chose a site for a new town named Kelmscott on the banks of the Canning River.

Convicts partly constructed and maintained the Canning River Convict Fence. This structure is still a notable landmark to this day. It was built primarily for the use of barges carrying timber from Mason's Timber Mill in the Darling Ranges. 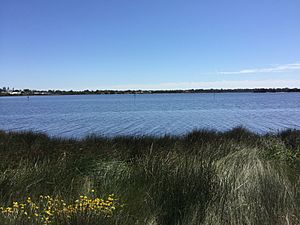 Part of the Convict Fence in Canning River between Shelley Foreshore Reserve and Salter Point.

The river is home to much wildlife including dolphins, pelicans, swans and many other bird species.

Algal blooms occur naturally in the Canning River system, they are caused by a buildup of nutrients in the river. Human activities including farming, residential gardens and parklands are the major causes of increases in levels, the blooms are potentially toxic to both mammal and marine life. The Swan River Trust monitors the levels of nutrients and growth of the algae issuing warnings and closing sections of the river to all activities. The Trust also operates cleanup programs to reduce the amount of nutrients reaching the river, as well phosphorus removal and oxygenation in areas were blooms have been identified.

The Trust is encouraged by the appearance of Azolla carpets on sections of the Canning River as this fern is known to reduce the amount of sunlight available to the algae as well as absorbing large amounts of phosphorus and other nutrients from the water. However, it is possible that Azolla carpets can cause deoxygenation and emit a strong sulfur smell. 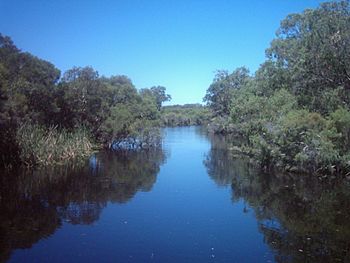 Canning River without the Azolla in February 2006. 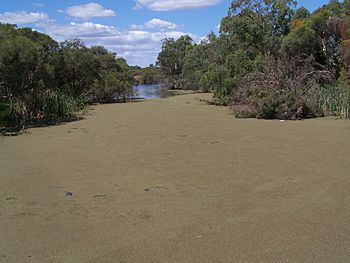 Same location covered in a carpet of Azolla March 2007.

All content from Kiddle encyclopedia articles (including the article images and facts) can be freely used under Attribution-ShareAlike license, unless stated otherwise. Cite this article:
Canning River Facts for Kids. Kiddle Encyclopedia.