Leeuwin-Naturaliste National Park is a national park in the South West region of Western Australia, 267 km (166 mi) south of Perth. It is named after the two locations at either end of the park which have lighthouses, Cape Leeuwin and Cape Naturaliste. It is located in the Augusta-Margaret River and Busselton council areas, and is claimed to have the highest visiting numbers of any national park in Western Australia. The park received 2.33 million visitors through 2008–2009.

It has significant stands of karri and jarrah forest, as well as an extensive network of caves – some of which are accessible by the public.

The rugged coastline stretches 120 km (75 mi) from the northern end at Bunker Bay to Augusta at the southern end and has many features of interest including the granite formations, Sugarloaf Rock and Canal Rocks. The coastal area also contains many beaches with well-known surf breaks, such as Supertubes, Yallingup beach and Smiths Beach.

The vegetation found in the park varies from the coastal scrub-heath along the coastline that opens up into large areas of peppermint trees, banksia and karri forest.

A large variety of bird species inhabit the park including many sea birds, red-eared firetail, white-breasted robin, rock parrot and emu. Native mammals that can be found within the park include southern brown bandicoots, western grey kangaroos, western ringtail possums and brush wallabies.

The national park was created from crown lands along the Leeuwin – Naturaliste ridge at a time after the main primary industries in the region had been dairying and forestry, and when increased land-use conflict was arising from the spread of wineries, increased population on hobby farms and other agricultural activities.

Since then many competing land uses have created a complex land management scenario for state and local government authorities trying to mediate quite conflicting issues. The national park is located on some of the most vulnerable land in the region.

The ridge's geology and the variations in vegetation are confined to a number of very narrow bands that follow the north–south orientation of the ridge.

The ridge has a whole series of caves that run the length of the ridge. It also has the cave known as Devil's Lair which has important archaeological significance. 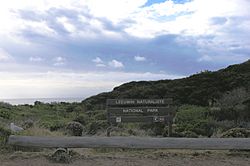 The start of Leeuwin-Naturaliste National Park, at Cape Leeuwin.

In 2001, the Department of Environment and Conservation (DEC) opened the Cape to Cape Track, a 135 kilometre walking track along the Leeuwin-Naturaliste ridge.

All content from Kiddle encyclopedia articles (including the article images and facts) can be freely used under Attribution-ShareAlike license, unless stated otherwise. Cite this article:
Leeuwin-Naturaliste National Park Facts for Kids. Kiddle Encyclopedia.