The white-breasted robin (Quoyornis georgianus) is a passerine bird in the Australasian robin family Petroicidae and is the only species placed in the genus Quoyornis. It is endemic to southwestern Australia. Unlike many other Australian robins, it lacks bright colours in its plumage, being a predominantly greyish bird with white underparts. Like other closely related Australasian robins, it is a cooperative breeder. It is sedentary, with pairs or small groups maintaining territories.

The white-breasted robin was first described by the French naturalists Jean René Constant Quoy and Joseph Paul Gaimard in 1830 as Muscicapa georgiana, taking its name from the site King George Sound, where the authors had collected specimens. It was later described by John Gould in 1846 as Eopsaltria leucogaster, though as the former took precedence, its specific name remains georgiana. Australian amateur ornithologist Gregory Mathews described a paler specimen from Warren River as a distinct subspecies warreni, though this was not recognised subsequently.

A 2009 genetic analysis of nuclear and mitochondrial DNA unexpectedly placed the white-breasted robin as sister taxon to the two Tregellasia robins native to northeastern Australia. This result was confirmed by another molecular phylogenetic study published in 2011. The species is now placed in its own genus Quoyornis, which was introduced by Mathews in 1912. The name combines Quoy's name with the Ancient Greek ornis 'bird'.

White-breasted robin is the official name given to this species by the International Ornithologists' Union (IOC). Although, like all Australian robins, it is not closely related to either the European robin or the American robin. Gould had called it 'white-bellied robin' in 1848, and other terms used included grey-breasted or white-breasted shrike-robin from the late 19th and early 20th centuries. The 'shrike-' prefix was dropped by the RAOU in 1926. It is known as boydjil by the local indigenous people of Augusta.

The white-breasted robin ranges between 14.5 and 17.0 cm (5 3⁄4 and 6 3⁄4 in) long, with a wingspan of 22–25 cm (8 3⁄4–9 3⁄4 in). The male weighs 20.5 g, while the female is lighter at 16.5 g. Males and females are similar in coloration, with blue-grey upperparts, paler eyebrows, and whitish underparts. The grey tail is tipped with white. Bills and feet are black in colour, while eyes are dark brown. Birds from the northern part of its range are smaller and darker grey in colour. Juveniles are brownish.

The white-breasted robin is found in Western Australia south from Geraldton to the southwest corner of the continent. Within this area, it is mainly restricted to two areas of different habitat. In the main southern part of its range, it is found in an area bounded by Jarrahdale and Woorooloo on or east of the Darling Scarp, and south-east to Beaufort Inlet. Here it occurs in tall forest dominated by karri (Eucalyptus diversicolor), where it is found in dense undergrowth of such plant species as karri hazel (Trymalium odoratissimum subsp. trifidum), karri she–oak (Allocasuarina decussata), and nedik (Bossiaea aquifolium), typically along rivers and gullies. It also inhabits dry sclerophyll forest of karri, jarrah (Eucalyptus marginata), and bull banksia (Banksia grandis), where it lives in the 2-3 m high understory. The northern population is found along a narrow band from Geraldton south to Yanchep National Park, where it lives in coastal thickets—often covered in dodder—of Acacia rostellifera, Acacia cyclops, Melaleuca cardiophylla growing over sand dunes on limestone soils. It is sedentary, with pairs or small groups maintaining territories in its range. Young male birds remain around their parents' territories as helper birds for around a year, while females disperse. 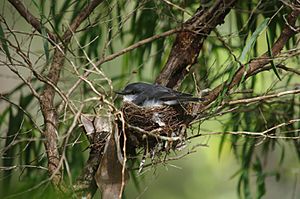 Breeding season is late winter to early summer, with up to two broods raised. The nest is a neat cup made of dry grass, bark, and spider webs, generally located in a tree-fork in dense scrub, close to a watercourse. Two pale olive- to blue-green eggs, often splotched with a darker variant of the background colour, are laid. They measure 16 mm x 21 mm, and one is often much paler than the other. Incubation lasts 16 or 17 days, with young leaving the nest two weeks after hatching.

The white-breasted robin is insectivorous, foraging for its prey mainly on or near the ground, in or beneath undergrowth.

All content from Kiddle encyclopedia articles (including the article images and facts) can be freely used under Attribution-ShareAlike license, unless stated otherwise. Cite this article:
White-breasted robin Facts for Kids. Kiddle Encyclopedia.