The western ringtail possum or ngwayir refers to a species of possum, Pseudocheirus occidentalis, found in a small area of Southwest Australia. They are a cat-sized marsupial with a stocky build, dark greyish-brown fur, pale underparts and a long prehensile tail with a whitish tip. Ngwayir forage at night through the upper canopy of trees, feeding on young leaves, flowers and fruit, especially in groves of the weeping peppermint Agonis flexuosa. Breeding occurs mainly during the winter, the single juvenile emerging from the pouch after about three months. The population has declined by more than 95% since British settlement, due to clearing of habitat, fire and the introduction of the red fox Vulpes vulpes, and is classified as Critically Endangered. The population in most areas has catastrophically declined or become locally extinct, but strongholds remain in the urbanised areas near Busselton and Albany.

The original description of the western population was as a separate species, Pseudocheirus occidentalis, although have it is also noted as a subspecies or member of a Pseudocheirus peregrinus species complex.

Common names include the western ringtail possum, ngwayir, womp, woder, ngoor and ngoolangit. The names derived from the Noongar language were collated in an ethnographic survey of historical interviews, and included two names noted by John Gilbert and others at the Swan River Colony, King George Sound and elsewhere; the local names for this species are regionally distinct rather than dialectical variants. The common name assigned by Oldfield Thomas in his description of P. occidentalis was western ring-tailed phalanger.

A species of Pseudocheirus, arboreal marsupials around the size of a domestic cat, all of which have stocky bodies and legs with grasping feet suited to climbing. The profile of the back and rump slopes toward a prehensile tail that tapers to a fine and white point. The species has a head and body length of 320–400 mm, a tail length of 300–400 mm, and a weight of 850 to 1000 grams (1300 g). Pseudocheirus occidentalis has dark grey-brown fur with light patches behind the ears and a creamy white, sometimes greyish, colour at the underside of the body that extends to the chest and throat. It differs from the common ring-tail possum found on the east of the continent, by lacking any rufous colouration in the fur.

The western ringtail is confined to south-western Western Australia where it is now reduced to patches of mainly eucalypt forest between Two Peoples Bay and the Collie River, with the most inland population at Perup. The species favours coastal forest habitat still dominated by Agonis flexuosa (weeping peppermint) and eucalypt forest that has not been subject to modern logging and fire practices. Strongholds for the population in the distribution range include urban gardens and reserves in the cities of Busselton and Albany, where refuge from fire and foxes has been found.

Urban populations surveyed in the city of Albany have revealed an average individual range of 0.88 hectares, moving from their dreys in the day to their preferred night-time habitat in eucalypts. The study demonstrated that populations varied in their use of habitat and the size of the range was dependent on qualities such as the extent and connections of the canopy cover in its favoured tree species. Further studies in the Albany region of the species occupancy of other forest types were published in 2019. including records of their occurrence in the sheoak woodlands dominated by Allocasuarina fraseriana. While found in greater numbers in eucalypt woodlands of jarrah and Eucalyptus staeri, the use of sheoak woodland was previously unknown.

The distribution range has contracted by over 90% since the colonial settlement of the region in the early nineteenth century, corresponding to the greatly altered ecology and Australia's mammalian extinction event, and the diminishing abundance has been especially noted in the few historical surveys of the Southwest Australia's mammals. Populations centres at the beginning of the twenty first century became isolated by rapid expansions of urbanised areas, remaining on the Swan Coastal Plain and the undisturbed peppermint stands at the south. Inland subpopulations at the wet and moderate jarrah and karri forest were thought to be up to several hundred thousand prior to 2002, but these numbers were reduced by probably greater than 99% by 2009. The archaeological records and other known locations show a historical range that extended southwest of a line from Geraldton, greater than 400 kilometres north of the Swan River, to the Hampton Tableland on the south coast, 200 km west of the border of South Australia.

The western ringtail is an arboreal and nocturnal herbivore with a relatively small home range of 0.5-6 ha, dependent on habitat type. It uses tree hollows and builds dreys for shelter in tree canopies, their nest-like drey is an assemblage of shredded bark, twigs and leaves. They are primarily arboreal, but will move through understorey or open ground to feed or gain shelter when the tree canopy is unconnected. Sheltering at ground level is recorded, though not usual, more frequently be found at hollows and the upper story of a forest; the species has occasionally be seen to occupy rabbit burrows.

Pseudocheirus occidentalis folivorous diet includes leaves, shoots, fruit and flowers of a range of plants. Favoured food trees are jarrah, Eucalyptus marginata, and marri, Corymbia calophylla, with the weeping peppermint Agonis flexuosa being the most preferred food source. The quality of its preferred food source, the weeping peppermint, is higher when the forest has been less exposed to high intensity fires. the foliage containing higher levels of nitrogen and less toxins than trees responding to damage. Young leaves are preferred, avoiding the lignin content of mature plant matter. The species is coprophagic, reconsuming faecal matter digested during the day to increase the nutrients derived from their food.

Births occur mainly in winter, usually of only one young. The young emerge from the pouch at about three months of age, when they weigh about 125 g, and suckle until they are 6–7 months old, weighing about 550 g. The life span of P. occidentalis has been recorded as up to four years in a jarrah forest area, and six years on the Swan Coastal Plain; a female under care of a rehabilitation facility lived for nine years. 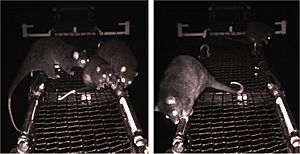 P. occidentalis on a rope bridge

The species will attempt to cross roadways within their foraging range, which leads to a high degree of fatalities as road kill. A solution provided for other arboreal species, the construction of rope bridges, was created and observed to evaluate the impact on gene flow and mortality in a population near Busselton. The possums investigated the facility while still under construction and made the first crossing one month after the bridges completion. During the study period the use of the bridge increased to around nine crossings per night, although less frequently when weather or moonlight inhibited their movements, and its use was adopted by juveniles who had been carried across by their mother. The success of the rope bridge in providing an alternative to road crossing was greater than anticipated, when compared to the adoption of possums and gliders in similar programs and may be a means of reducing mortality and population fragmentation.

The western ringtail has declined in abundance and range because of habitat destruction and predation by Vulpes vulpes, the fox introduced from Europe in the early twentieth century. Current threats include ongoing habitat loss and predation by introduced species. Altered fire regimes have had significant impact on many groups, high intensity fires removes suitable refuge and large burns can clear an area of food, causing starvation.

The conservation status of the species was assessed by the International Union for Conservation of Nature in 2017, and classified as critically endangered due to a declining population that numbered around 3400 individuals. Western ring-tails are listed as endangered by the state authority in Western Australia and recognised on the region's sensitive species list and by national legislation as critically endangered.

All content from Kiddle encyclopedia articles (including the article images and facts) can be freely used under Attribution-ShareAlike license, unless stated otherwise. Cite this article:
Western ringtail possum Facts for Kids. Kiddle Encyclopedia.