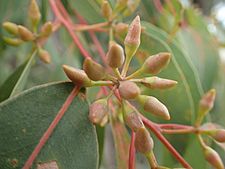 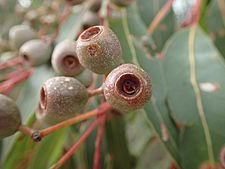 Eucalyptus staeri, commonly known as Albany blackbutt, is a species of small tree or a mallee and is endemic to the south-west corner of Western Australia. It has rough bark on the trunk and branches, thick, lance-shaped adult leaves, flowers buds in groups of between seven and fifteen, creamy white flowers and shortened spherical fruit.

Albany blackbutt was first formally described in 1914 by Joseph Maiden in the Journal and Proceedings of the Royal Society of New South Wales and given the name Eucalyptus marginata var. staeri. In 1924 Stephen Lackey Kessell and Charles Gardner raised the variety to species status as Eucalyptus staeri. The specific epithet (staeri) honours John Staer (1850-1933) who collected the type specimens.

Eucalyptus staeri is found mostly in the south west corner of the Great Southern region of Western Australia centred around the town of Albany with smaller populations extending north into the Wheatbelt. The preferred habitat is sandy soil in near-coastal scrubland.

All content from Kiddle encyclopedia articles (including the article images and facts) can be freely used under Attribution-ShareAlike license, unless stated otherwise. Cite this article:
Albany blackbutt Facts for Kids. Kiddle Encyclopedia.