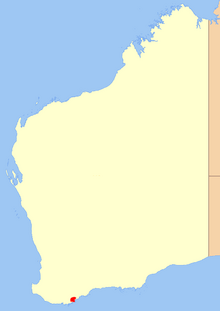 The Two People's Bay Nature Reserve is a small nature reserve on the south west coast of Western Australia. It is where Gilbert's Potoroo, one of the world's rarest mammals can be found. A bird species thought to have been extinct was also rediscovered at Two Peoples Bay. The area was made a reserve in 1967.

In 1962, the noisy scrubbird was rediscovered here. In 1994, Gilbert's Potoroo was found here too. It had not been seen for more than 120 years.

All content from Kiddle encyclopedia articles (including the article images and facts) can be freely used under Attribution-ShareAlike license, unless stated otherwise. Cite this article:
Two Peoples Bay Nature Reserve Facts for Kids. Kiddle Encyclopedia.