Baudin's black cockatoo (Zanda baudinii), also known as Baudin's cockatoo or the long-billed black cockatoo, is a species of genus Zanda found in southwest Australia. The epithet commemorates the French explorer Nicolas Baudin. It has a short crest on the top of its head, and the plumage is mostly greyish black. It has prominent white cheek patches and a white tail band. The body feathers are edged with white giving a scalloped appearance. Adult males have a dark grey beak and pink eye-rings. Adult females have a bone coloured beak, grey eye-rings and ear patches that are paler than those of the males.

Edward Lear depicted the species in Illustrations of the Family of Psittacidae, or Parrots, published in 1832, from a specimen owned by Benjamin Leadbeater, though did not write a description or provide measurements. The female bird he figured as the type specimen was indicated by Lear in a note at the base of the plate as, “In the possession of Mr Benjamin Leadbeater”.

The three species of the genus Zanda have been variously considered as two, then as a single species for many years. In a 1979 paper, Australian ornithologist Denis Saunders highlighted the similarity between the short-billed and the southern race xanthanotus of the yellow-tailed and treated them as a single species with the long-billed as a distinct species. He proposed that Western Australia had been colonised on two separate occasions, once by a common ancestor of all three forms (which became the long-billed black cockatoo), and later by what has become the short-billed black cockatoo. However, an analysis of protein allozymes published in 1984 revealed the two Western Australian forms to be more closely related to each other than to the yellow-tailed, and the consensus since then has been to treat them as three separate species.

Baudin's black cockatoo is about 56 cm (22 in) long. It is mostly dark-grey with narrow vague light-grey scalloping, which is produced by narrow pale-grey margins at the tip of dark-grey feathers. It has a crest of short feathers on its head, and it has whitish patches of feathers that cover its ears. Its lateral tail feathers are white with black tips, and the central tail feathers are all black. The irises are dark brown and the legs are brown-grey. Its beak is longer and narrower than that of the closely related and similar Carnaby's black cockatoo. 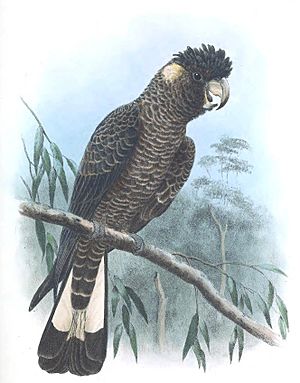 The Baudin's black cockatoo is one of two species of white-tailed black cockatoo endemic to south-western Australia which were only separated taxonomically in 1948. It is closely associated with moist, heavily forested areas dominated by marri Corymbia calophylla and is threatened by habitat destruction.

The range of threats to the declining population, estimated to be between ten and fifteen thousand remaining individuals, is listed with the conservation status of endangered by extinction.

The bird is part of an annual census, the Great Cocky count, that has been held every year since 2009 to track the population change of Baudin's and other black cockatoos.

Sites identified by BirdLife International as being important for Baudin's black cockatoo conservation are Araluen-Wungong, Gidgegannup, Jalbarragup, Mundaring-Kalamunda, North Dandalup, the Stirling Range and The Lakes.

All content from Kiddle encyclopedia articles (including the article images and facts) can be freely used under Attribution-ShareAlike license, unless stated otherwise. Cite this article:
Baudin's black cockatoo Facts for Kids. Kiddle Encyclopedia.