Kids Encyclopedia Facts
This page is about the Australian river. For others of the same name, see Ashburton River (disambiguation). 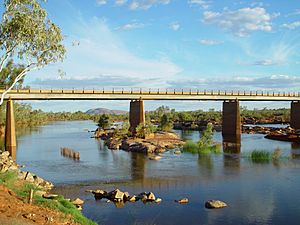 The Ashburton River is located within the Pilbara region of Western Australia. 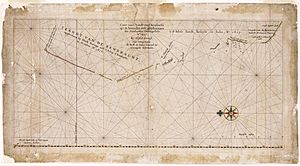 The Ashburton River is believed to have first been named Willem's River during the voyage of the Dutch East India Company (Vereenigde Oostindische Compagnie, or VOC) ship Mauritius in 1618, under command of Supercargo Willem Janszoon, and captained by Lenaert Jacobszoon. It was one of the few features named on a nautical chart made in 1627. This area was first visited by Europeans in 1618, when the crew of the ship Mauritius encountered the Western Australian coastline, and mapped a river they named Willem's River.

Janszoon was the captain of the Duyfken in 1605-1606, when part of the Gulf of Carpentaria was mapped, during the earliest documented visit to Australia by a vessel from Europe.

Caert van't Landt van d'Eendracht ("Chart of the Land of Eendracht") is a 1627 chart made by Hessel Gerritsz and is one of the earliest charts showing the coastline of Western Australia. The Willem River is located to the extreme left (north) end of the coastline on the chart and a closer view is provided below. 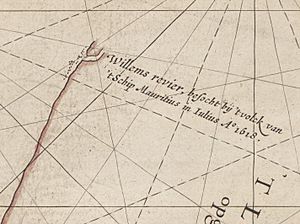 The detail of the river’s position on the chart backs up the claim that this is the Ashburton River, which, being at 21 degrees 40 minutes south and 114 degrees 56 east, is almost exactly the latitude as shown on the chart, and given by Hessel Gerritsz as 21 degrees 45 minutes south latitude. The chart is oriented with north to the left, showing lines of latitude from 20th parallel south to the 35th parallel south at the base of the map. The lines of latitude appear to be very accurate, matching known features through the length of the chart.

The township of Onslow was located at the mouth of the Ashburton River where a jetty was used as the town's and region's port, but once the new deep water port facility was completed at Beadon point 15 kilometres (9.3 mi) north of the old townsite, the townsite was moved.

The river supports a wide variety of fish including barramundi and mangrove jack. The occasional salt water crocodile is also spotted in the river. Bird species such as black swans, the striated heron, Australian bustard and bush stone-curlew can be found along the river's banks.

All content from Kiddle encyclopedia articles (including the article images and facts) can be freely used under Attribution-ShareAlike license, unless stated otherwise. Cite this article:
Ashburton River (Western Australia) Facts for Kids. Kiddle Encyclopedia.