The mangrove red snapper is native to the Indian Ocean and the western Pacific Ocean from the African coast to Samoa and the Line Islands and from the Ryukyus in the north to Australia in the south. It has also been recorded from the coast of Lebanon in the Mediterranean Sea, having reached there from the Red Sea through the Suez Canal, though it is not established in the Mediterranean. 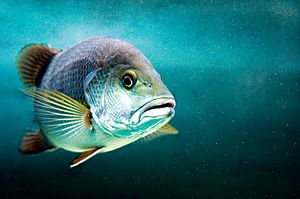 Coloration of the mangrove red snapper ranges from burnt orange, to copper, to bronze and dark reddish-brown, depending on its age and environment. Younger fish caught in estuarine areas are often darker than older fish taken from offshore reef areas, and exhibit lighter vertical bands down their flanks.

Like other tropical snappers (family Lutjanidae), mangrove jacks have prominent canine teeth in their jaws that are used for seizing and holding prey. These teeth can cause a nasty injury to unwary fishers.

In reef areas, mangrove red snappers are sometimes confused with two-spot red snapper or red bass (Lutjanus bohar), a known carrier of ciguatera toxin. The red bass, however, is usually darker in coloration, has fewer dorsal-fin spines, scale rows on the back that rise obliquely from the lateral line, and a deep groove from the nostrils to the eyes.

The species is carnivorous; they are predators, feeding mainly at night on fish, crustaceans, gastropods, and cephalopod molluscs. As ambush predators, they often dwell around mangrove roots, fallen trees, rock walls, and any other snag areas where smaller prey reside for protection.

As its name implies, the mangrove red snapper is commonly found in mangrove-lined estuarine systems, although is known to migrate to offshore reefs to spawn. As they mature, mangrove red snappers move into open waters, sometimes hundreds of kilometers from the coast to breed. These larger fish are sometimes caught by bottom-fishers with heavy tackle, though they still remain difficult to land due to their speed and proximity to sharp reef bottoms. 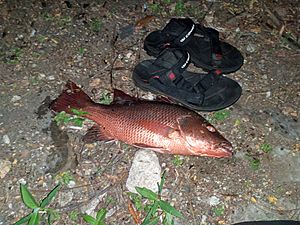 Mangrove red snapper is a popular and important commercial and recreational fish throughout its range, and considered to be an excellent food fish.

For fishermen, the telltale sign of a hooked mangrove red snapper is the explosive run for cover once the bait (or lure) is taken. Many fish (and so lures) are lost once they reach the protection of the snags as a result of their initial burst of speed.

The mangrove red snapper is a highly regarded table fish with firm, sweet-tasting, white flesh. While often a nuisance species when targeting the infamous barramundi, many fisherman rate the eating qualities of the jack higher than it.

All content from Kiddle encyclopedia articles (including the article images and facts) can be freely used under Attribution-ShareAlike license, unless stated otherwise. Cite this article:
Mangrove red snapper Facts for Kids. Kiddle Encyclopedia.