The Pine River is a small river in South East Queensland, Australia.

The river is formed by the confluence of the North Pine and the South Pine rivers at Lawnton, continuing into Bramble Bay. The Brisway map reference is 440 D10.

The Pine River carries the city border between the Moreton Bay Region and City of Brisbane along its middle (continuing up the South Pine River). The northern shoreline follows Pine Rivers suburbs of Murrumba Downs and Griffin, while the southern shoreline follows Brisbane suburbs of Bald Hills and Brighton. The river descends 11 metres (36 ft) over its 7-kilometre (4.3 mi) course. The Bald Hills Creek feeds into the Pine River which create the Bald Hills Creek and Tinchi Tamba Wetlands Reserve, a large environmental park covering more than 380 hectares (940 acres). The Pine River and Hays Inlet wetland is significant because of its value to wildlife, especially migratory waders. The Pine River is classified as being 'extensively modified'.

The Pine Rivers Shire draws its name from the Pine, the North Pine and the South Pine rivers. 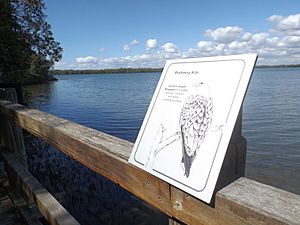 The predominant land uses in the catchment area are native bush, grazing, rural residential and urban.

A maximum of ten commercial boats fished Pine River in 1999, for a total catch of 21.9 tonnes (21.6 long tons; 24.1 short tons). Pine River is also used for other water based recreation including water skiing and the use of personal water craft.

All content from Kiddle encyclopedia articles (including the article images and facts) can be freely used under Attribution-ShareAlike license, unless stated otherwise. Cite this article:
Pine River (Queensland) Facts for Kids. Kiddle Encyclopedia.