Bramble Bay is an embayment of Moreton Bay in South East Queensland, Australia. The Brisway map reference is 12 H5, or see page 91 G19 in Refidex. 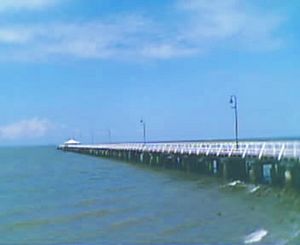 The Brisbane to Gladstone yacht race begins in Bramble Bay. Activities for the annual race are centred on the Shorncliffe pier and nearby foreshore.

Bramble Bay is the most environmentally degraded part of Moreton Bay. Because the bay is so close to the urban populations of Brisbane and Redcliffe the collection of shelled marine animals such as oysters, scallops and limpets is banned. Fishing within bay's closed waters, risks on the spot fines at all times under Queensland's closed water fishing regulations.

Bramble Bay flows into Hays Inlet to the north-west, and Pine River flows into Bramble Bay to the south-west. Some definitions place the mouth of the Brisbane River and the Boondall Wetlands in Bramble Bay. This would also place the mouths of a number of smaller creeks south of Shorncliffe, including Cabbage Tree Creek (formerly Tighgum Creek), Nundah Creek and Kedron Brook, within the Bramble Bay catchment.

Both rivers flowing into Bramble Bay carry high loads of nutrients and suspended sediments. Water in the bay is very turbid. At times two sewerage plumes from the rivers are visible in Bramble Bay. The residence time for Bramble Bay, that is, the period of time that a parcel of water remains at a particular location, is 59 to 62 days, the longest for any part of Moreton Bay.

In 2009, the annual Healthy Waterways Partnership Report Card rated Bramble Bay an F from a previous C. The rating deteriorated because of an increase in phytoplankton and nitrogen concentrations, as well as decreases in water clarity and salinity.

During the past the bay contained large areas of seagrass which attracted feeding dugongs, however there are no seagrass beds in the bay today. This is due to a lack of sunlight reaching the seabed.

All content from Kiddle encyclopedia articles (including the article images and facts) can be freely used under Attribution-ShareAlike license, unless stated otherwise. Cite this article:
Bramble Bay Facts for Kids. Kiddle Encyclopedia.