Woody Point is a residential suburb of the Moreton Bay Region at the south-east of the Redcliffe peninsula, approximately 24 kilometres (15 mi) north-northeast of Brisbane, the state capital of Queensland, Australia. It was formerly a banana plantation. 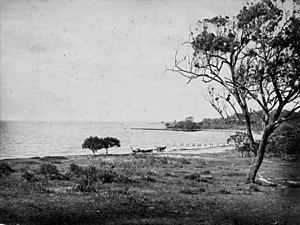 In 1799, Matthew Flinders landed on the peninsula and named the location Red Cliff Point after the colours in the cliffs. In 1823 the peninsula was selected as the site of Queensland's first penal colony but, by 1825 the prisoners were moved further up the Brisbane River to escape the mosquitoes and the resistance from displaced local Aboriginal Australians. Redcliffe was once a small seaside retreat 40 km north of Brisbane. When the Hornibrook and Houghton Highways linked Brighton, an outer Brisbane suburb, to the Redcliffe peninsula, Redcliffe then became much more accessible and grew as part of Brisbane's suburban sprawl.

Woody Point's Apex Park & Bicentennial Park were constructed by reclaiming land along the foreshore in the 1970s. 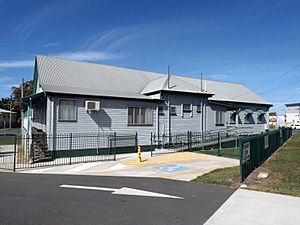 Woody Point's current renovations include the construction of high-rise apartment buildings overlooking Bramble Bay, Moreton Bay, The Port of Brisbane and the Ted Smout Highway. Until recently, restaurants and cafes were very limited in the suburb, however currently Woody Point boasts some of the most highly rated and recognized restaurants on the Redcliffe Peninsula including The Steak & Crabhouse & Masala Point Cafe.

The closest shopping centre is either Margate Village, some 2 km north or Bayside Plaza in Clontarf, some 3 km southwest. Woody Point accommodates localized convenience retail, a corner store, takeaways, a medical clinic and pharmacy & an Australian Post branch within its Woody Point Village.

All content from Kiddle encyclopedia articles (including the article images and facts) can be freely used under Attribution-ShareAlike license, unless stated otherwise. Cite this article:
Woody Point, Queensland Facts for Kids. Kiddle Encyclopedia.