Clontarf is a suburb of the Moreton Bay Region, Queensland, Australia. It is in the south-west of the Redcliffe peninsula, approximately 29 kilometres (18 mi) north-northeast of Brisbane, the state capital. It was named after Clontarf in Ireland.

The land use is a mix of residential and light industrial. 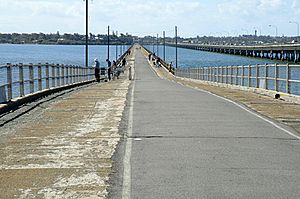 The Hornibrook Bridge, looking towards the southern tip of Clontarf

Clontarf is connected to Brisbane City, across Bramble Bay, by the Houghton Highway which is a 2.7 km long causeway that provides access to the southern tip of Redcliffe City, greatly decreasing the travel time between Redcliffe and Brisbane. The current pair of bridges, Houghton Highway and its twin Ted Smout Memorial Bridge, replaced the original Hornibrook Bridge which is now closed and mostly demolished.

Clontarf Beach and Bells Beach are two of the closest beaches to Brisbane City.

Pelican Park is known for its kite flying conditions, and a local industry has built around the sport. On weekends, many kites can be seen flying above Clontarf from the Hornibrook Bridge. During May, the Redcliffe Kite Club, based in Clontarf holds a two-day kite event called Kitefest.

The median age of the Clontarf population was 42 years, 5 years above the national median of 37.

Brighton has a number of heritage-listed sites, including:

Clontarf is served by several bus routes: Route 315, a limited-stops Monday-Friday service to Brisbane City; Route 693, an internal route within Redcliffe City, and Routes 690 and 695 to Sandgate railway station, an approximately 10- to 15-minute commute. All services are provided by Hornibrook Bus Lines.

All content from Kiddle encyclopedia articles (including the article images and facts) can be freely used under Attribution-ShareAlike license, unless stated otherwise. Cite this article:
Clontarf, Queensland Facts for Kids. Kiddle Encyclopedia.