Rothwell is a residential suburb of the Moreton Bay Region in the west of the Redcliffe peninsula, approximately 28 kilometres (17 mi) north-northeast of Brisbane, the state capital of Queensland, Australia. Saltwater Creek marks the suburb's southern and western border. Anzac Avenue passes through the south of the suburb. 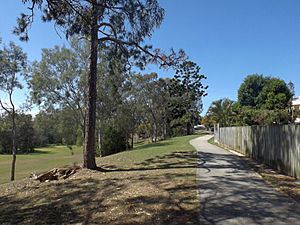 The suburb's name is after the president of the Royal Automobile Club of Queensland, TJ Rothwell, who in 1921 proposed a memorial drive marked by an avenue of trees to Redcliffe via the upgraded main road known as Anzac Avenue).

Rothwell was officially named as a suburb by the Queensland Place Names Board on 1 July 1970.

Rothwell is one of the few areas on the Redcliffe Peninsula prone to minor flooding due to Saltwater Creek. The Rothwell sports oval along McGahey Street is frequently in the local press due to flooding and its relocation has been spectated for several years. 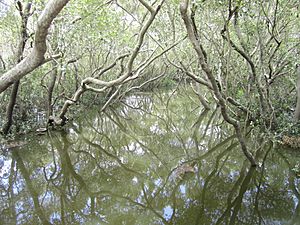 Rothwell is a residential area with a growing commercial district, home to The Zone and a mixture of diverse retail businesses. Recently, a Woolworths supermarket was developed near The Zone on Deception Bay Road. A Bunnings store is on Anzac Avenue. Currently, the larger shopping centres and supermarkets are in nearby Kippa-Ring and Deception Bay.

Rothwell is serviced by the Rothwell Railway Station which connects to Petrie and is also home of the Redcliffe Airport.

All content from Kiddle encyclopedia articles (including the article images and facts) can be freely used under Attribution-ShareAlike license, unless stated otherwise. Cite this article:
Rothwell, Queensland Facts for Kids. Kiddle Encyclopedia.