Newport is a coastal residential suburb of the Moreton Bay Region at the north of the Redcliffe peninsula, approximately 29 kilometres (18 mi) north-northeast of Brisbane, the state capital of Queensland, Australia. 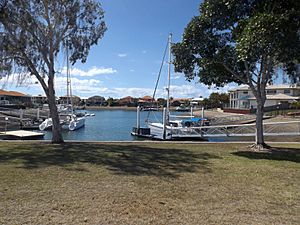 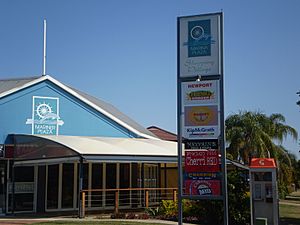 The suburb of Newport was gazetted as the Place Name Decision Notice (No 21) 2008 in the Queensland Government Gazette – Natural Resources and Water on August 15, 2008 (2008-08-15), after a submission by the then Redcliffe City Council to the Queensland Government Department of Natural Resources and Water in October 2006. An earlier, unsuccessful attempt by the council to create the suburb was made in the 1990s.

Until 2008, Newport was made up of two areas - with that east of Albatross & Walkers Creek Canal being Scarborough, and that on the western side being part of Kippa-Ring. Currently, new land is being cleared and canals being dug out to form the next stage of the suburb to the west of the current established area.

The name Newport comes from the Newport Waterways housing estate that began development in the late 1970s; the artificial canals first filled with water in 1979.

The first stage of the Newport Waterways housing estate included reclaiming land where Endeavour Park is now situated and the clearance of swampy marshland behind Sunnyside Road. The suburbs first two estates which included the areas north and south of Griffith Road were completed by the early 1990s.

In the mid-late 1990s new canals were constructed west of the area formerly known as Kippa-Ring and a bridge over Albatross Canal, the main waterway, was finished in 2000. A small section of land was sold off as the first stage of the "Isles Of Newport" estate in the early 2000s west of Boardman Road in Kippa-Ring and featured a large park for residents.

With the announcement of the Redcliffe Peninsula railway line some 1.5 km from the centre of Newport and rapid growth projected for the Moreton Bay Region, Redcliffe Seaside Estates Pty Ltd, the developer of the entire Newport suburb, sold their remaining 143ha of land to Stockland in late 2014. The acquisition of land will see Newport's final stages completed within a decade and will include a retail precinct, large non-tidal lake and hundreds of house lots of various sizes. The purchase is Stockland's first major land acquisition in Queensland since North Lakes.

Newport is known for its predominantly water-side residential housing with artificial canal waterways, near the thriving seafood industry at the Scarborough Boat Harbour.

All content from Kiddle encyclopedia articles (including the article images and facts) can be freely used under Attribution-ShareAlike license, unless stated otherwise. Cite this article:
Newport, Queensland Facts for Kids. Kiddle Encyclopedia.