Scarborough is a coastal residential suburb on the Redcliffe Peninsula in the north of the Brisbane metropolitan area in Queensland, Australia. It falls within the Moreton Bay Region local government area. Along with its neighbouring coastal suburbs on the Redcliffe Peninsula, the suburb is a popular recreational destination within the Brisbane metropolitan area. Scarborough Beach is a safe swimming beach, with an adjacent playground.

The median age of the Scarborough population was 49 years, 11 years above the national median of 38.

The main street of Scarborough, Landsborough Avenue, is a popular location for families and day visitors from Brisbane with numerous cafés. Part of the reason for its popularity is its overlooking views to Moreton Island across Moreton Bay, and quieter ambience compared to the Redcliffe central business district. Children enjoy the themed playground and its large cottonwood trees.

The point of Scarborough is home to Scarborough Marina and Scarborough Holiday Village, while further around the bay is Newport Marina. 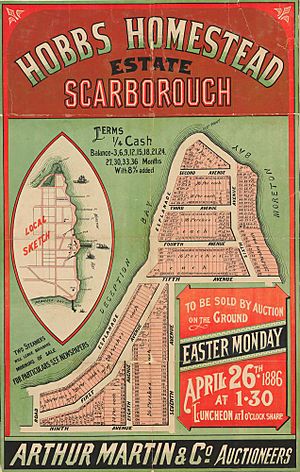 Parts of the movie Scooby-Doo were filmed at Queens Beach in Scarborough; the majority of the movie was filmed at Tangalooma Resort at Moreton Island.

All content from Kiddle encyclopedia articles (including the article images and facts) can be freely used under Attribution-ShareAlike license, unless stated otherwise. Cite this article:
Scarborough, Queensland Facts for Kids. Kiddle Encyclopedia.