Moreton Island (Mulgumpin) is an island on the eastern side of Moreton Bay on the coast of South East Queensland, Australia. The Coral Sea lies on the east coast of the island. Moreton Island lies 58 kilometres (36 mi) northeast of the Queensland capital, Brisbane. 95% of the island is contained within a national park and a popular destination for day trippers, four wheel driving, camping, recreational angling and whale watching and a 75-minute ferry ride from Brisbane. It is the third largest sand island in the world. Together with Fraser Island, Moreton Island forms the largest sand structure in the world. It was the traditional country of the Ngugi before the onset of colonization.

The island is within the City of Brisbane and is gazetted into four localities, the small townships of Bulwer (on the north-west coast), Cowan Cowan (on the west coast) and Kooringal (on the south-west coast) with the bulk of the island being the locality of Moreton Island. The private Tangalooma Island Resort is also within the locality of Moreton Island. All residential areas are located on the western coast of the island facing Moreton Bay.

The island was named by Matthew Flinders. At least five lighthouses have been built on the island. A small number of residents live in four small settlements. Tangalooma was the site of a whaling station. Access to the island is by vehicular barge or passenger ferry services. Moreton Island is a popular destination for camping and fishing.

It is one of the wettest parts of the City of Brisbane with precipitation spread evenly throughout the year compared to other parts of South East Queensland. Cape Moreton receives an annual average rainfall of 1,567 millimetres (61.7 in).

The island covers an area of approximately 186 square kilometres (72 sq mi), and extends for 37 kilometres (23 mi) from north to south and is 13 kilometres (8.1 mi) at its widest point. Cape Moreton, at the north eastern tip of the island, is the only rock outcrop on the island. It was named Cape Morton by Captain James Cook in May 1770, and was at that time assumed to be part of the mainland. The current spelling came about because of a clerical error later.

The highest point on the island is named Mount Tempest, which at 280 metres (920 ft) AHD  is reputedly the highest, stabilised, coastal sandhill in the world. Close to Mount Tempest is another large sandhill—Storm Mountain at 264 metres (866 ft) AHD . Only in Iran are there sandhills of comparable size, measuring up to 210 metres (690 ft) from bases to crest.

Four small settlements exist on the western side of the island. The northernmost of these is Bulwer near the north western corner of the island, whilst Cowan Cowan is approximately 4.5 kilometres (2.8 mi) further south. Approximately 6 kilometres (3.7 mi) further south lies Tangalooma Island Resort. This former whaling station features the Tangalooma Marine Education and Conservation Centre (TMECC) and is known for its dolphin feeding and wreck diving. Tangalooma is the main access point to the island with regular passenger ferry and vehicular barge services. The island's main airstrip is 1,000 metres (3,300 ft) long and lies between Cowan Cowan and Tangalooma. The other settlement is Kooringal which is located near the southern tip of the island. This township has its own 500 metres (1,600 ft) airstrip and was serviced by a vehicular barge that ran to Amity Point on North Stradbroke Island until April 2009 when the barge was sold off due to limited business and high operation costs. A new vehicular barge called the Amity Trader now services the same route.

Fort Cowan Cowan, an old World War II bunker and fortification complex that was used to protect the approaches to Moreton Bay, is located north of Cape Cowan Cowan. The bar between the two islands is known as South Passage and is dangerous to cross in high seas.

Moreton Island is the traditional home of the Ngugi tribe. The islands contains numerous shell middens, indicating Aboriginal occupation of the island for at least 2000 years. While James Cook named the main headland on the island Cape Morton on the 17 May 1770, Those that came after him wrongly used "Moreton" it was Matthew Flinders who, on 31 July 1799, named the island. Castaways Thomas Pamphlett, John Finnegan and Richard Parsons traversed the island in March and April 1823 before heading to the mainland via Stradbroke Island. European residents settled on the island in 1848, after the Sovereign shipwrecked on the island and a pilot station was established at Bulwer. This pilot station was operated until 1909. The clipper Young Australia was wrecked on Moreton Island in 1872. 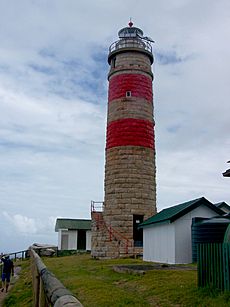 At Cape Moreton is Queensland's oldest lighthouse, Cape Moreton Light, which was first lit in 1857. The lighthouse was followed by at least four other lighthouse erected since the 1860s, at Comboyuro Point, North Point, Cowan Cowan Point and Yellow Patch. During World War II, a number of defence installations were installed on the island by the Royal Australian Navy and Australian Army. These sites included anti aircraft guns and mine control buildings. Their purpose was to protect the approaches to the port of Brisbane and at its peak 900 troops were stationed on the island.

Between 1952 and 1962, Tangalooma, on the western side of the island, was the site of Queensland's only whaling station, with humpback whales being harvested on their annual migration north. Each season up to 600 whales were processed with a maximum of 11 whales per day. The site of the whaling station is now the Tangalooma Wild Dolphin Resort. The flensing plan of the station still exists as part of the resort.

Moreton Island was included in the Greater Brisbane area in 1974. The council initially permitted 60% of the island to potentially be sandmined, however a public outcry led to the council changing the zoning to open space. The sands on the island contain rutile and zircon. The Queensland Government, led by Joh Bjelke-Petersen supported sandmining on the island and established the Cook Inquiry which produced a report recommending that 94% of the island be banned from mining. Despite this more mining licences were granted until 1984 when the Federal government announced it would decline export licences for the island's mineral sands. In 1989, then Premier of Queensland, Wayne Goss halted mining of the island and compensated the companies involved.

A salt-water lagoon on the island was used as a temporary home to a dugong called Pig. Pig was the youngest dugong ever successfully reared in captivity. The dugong was placed in the lagoon to increase its natural instincts before being released into the wild.

On 11 March 2009 the container ship MV Pacific Adventurer lost bunker oil and cargo north of Moreton Island during heavy seas that were generated by Tropical Cyclone Hamish. The ship reportedly lost 31 containers of ammonium nitrate and as much as 230 tonnes of bunker oil. The spilled bunker oil was washed ashore on beaches along the northern end of Moreton Island including Honeymoon Bay, as well as along Bribie Island and beaches on the Sunshine Coast. These have been deemed disaster areas, although a controversy has arisen as to the lack of early response as well as the refusal to accept offers of help or allow access to clean up the area.

The ship's owners face the possibility of up to A$2 million in fines and the skipper could have to pay up to $200,000. They may also be liable for up to $250 million for environmental damage to the shoreline.

Britain's Swire Shipping Ltd., the Hong Kong-registered ship's owner, said containers aboard the ship had slipped from the deck as it rocked in cyclone-stirred waters, ripping a hole in a bunker oil tank and spilling the equivalent of more than 11,000 imperial gallons (50,000 l) of bunk oil into the sea. Later, the company said a diver's inspection of the hull had led it to conclude the amount of spilled bunk oil was "significantly more" than that, but did not give a replacement figure.

Panorama of the island viewed from the Moreton Island lighthouse

Moreton Island has a number of heritage-listed sites, including: 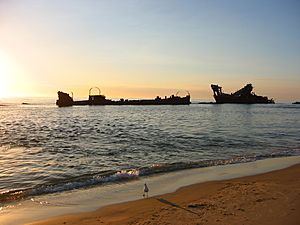 Several shipwrecks provide a safe diving spot at Tangalooma. They were placed there as a breakwater

Established in 1966, 98% of the island is contained within the Moreton Island National Park, which has a World Conservation Union (IUCN) category of II. The park is managed by the Queensland Parks and Wildlife Service. 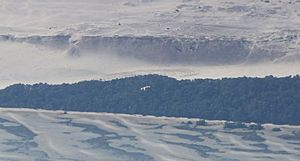 Camping and four wheel driving is permitted and possible in many parts, with the appropriate fee. Motor vehicle access is by ferry, but is for four wheel drive vehicles only, as there are no sealed roads on the island. Camping is permitted, however permits must be obtained on the mainland. There are plenty of recreational activities including sand tobogganing which Moreton is famous for, snorkeling & diving, bird watching, feeding dolphins, whale watching from land, fishing and parasailing.

All content from Kiddle encyclopedia articles (including the article images and facts) can be freely used under Attribution-ShareAlike license, unless stated otherwise. Cite this article:
Moreton Island Facts for Kids. Kiddle Encyclopedia.