Pinkenba is a town and eastern coastal suburb within the City of Brisbane, Queensland, Australia. In the 2016 census, Pinkenba had a population of 368 people.

The suburb is accessed by road via Kingsford Smith Drive, which passes an industrial area before reaching the suburb. A railway branch line to Pinkenba was constructed to encourage port development downstream away from the Brisbane central business district. The now-abandoned Pinkenba railway station opened in 1882 as the terminus of the line, and closed in 1993.

On the day of the 2011 census, 9.1% of employed people travelled to work on public transport and 63.6% by car (either as driver or as passenger). 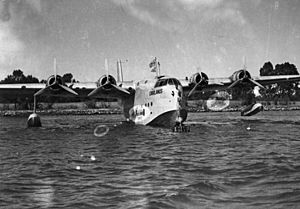 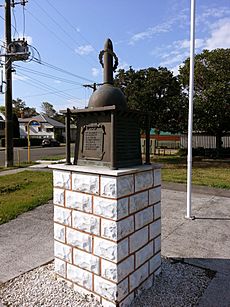 Pinkenba Wharf was the point of embarkation for many World War I soldiers. The Pinkenba & District War Memorial commemorates those from the district who served and died in the war. The memorial was unveiled on 16 August 1919 by the Queensland Governor, Sir Hamilton Goold-Adams.

QANTAS selected Pinkenba for their flying boat base in the 1930s. Until the war, Hamilton Reach was too congested, however the base eventually moved upstream providing better access for passengers.

On 6 March 1963, Queen Elizabeth II unveiled a roadside memorial which commemorates the discovery of commercial quantities of oil in Australia. Although significant oil deposits had been found at Moonie the pipeline to Brisbane was not completed until the following year. The site was selected because it was close to a large oil refinery which was to process the oil.

Pinkenba now has a historical trail which was designed on behalf of the Pinkenba Community Association and the Port of Brisbane with help from Brisbane City Council Neighbourhood planning team; more work is still to be done over the next ten years with the beautification of Pinkenba with the start being the local park and historical path and local pub.

Pinkenba has a number of heritage-listed sites, including:

Pinkenba is the site of BP's Bulwer Island Refinery (an import terminal since 2015), and Shell's Pinkenba Terminal. In 2011, Shell's operations at Bulwer Island were expanded, with the opening of a new bitumen and marine fuel import facility. Shell facilities include its Queensland state office, a bitumen plant, a lubricants and grease manufacturing facility, several warehouses and a fuel storage unit.

All content from Kiddle encyclopedia articles (including the article images and facts) can be freely used under Attribution-ShareAlike license, unless stated otherwise. Cite this article:
Pinkenba, Queensland Facts for Kids. Kiddle Encyclopedia.