Eagle Farm is an eastern industrial suburb of the City of Brisbane, Queensland, Australia. In the 2016 census, Eagle Farm had a population of 0 people.

Eagle Farm first appeared as a name in 1839, identifying a cultivation area in convict era Brisbane. In 1829 Captain Patrick Logan, chose this well-watered, fertile site between the Brisbane River and Serpentine Creek to farm mostly maize, pigs and cattle. The origin of the name apparently arose from eagles being observed around the farm. By 1834 women prisoners were working as field labour at Eagle Farm. By 1836 forty female prisoners were housed there, washing and mending clothes, growing vegetables. The site remained a prison for twice convicted female felons until transportation ended in 1839. Conditions for the females at the prison were documented by the Quaker missionary Backhouse in 1836.

In the 1850s, Aborigines set up camps in the Breakfast Creek Eagle Farm area, including groups of the Bribie Island, Ningy-Ningy (Toorbul Point to Redcliffe) and Wide Bay Aborigines who were losing their traditional territory further north. 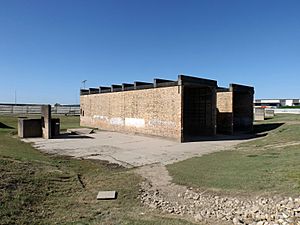 The Allison Engine testing stands site is part of Brisbane's TradeCoast Central at the old Brisbane airport site in the suburb of Eagle Farm, where new and rebuilt World War II Allison V-12 in-line liquid cooled aero engines were tested in the open air prior to fitting into reassembled WW2 aircraft, notably the P38-Lightning, Curtis Kittyhawk and Bell Airacobra. The masonry sections of the remains, being buildings and dividers between the engine testing bays, are largely intact. The engines were refurbished in the General Motors Holden (GMH) Breakfast Creek facility. Many of the workers in the GMH facility were women. 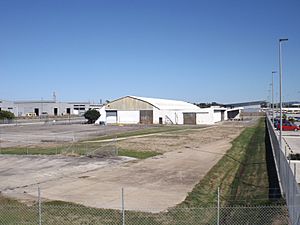 Eagle Farm has a number of heritage-listed sites, including:

All content from Kiddle encyclopedia articles (including the article images and facts) can be freely used under Attribution-ShareAlike license, unless stated otherwise. Cite this article:
Eagle Farm, Queensland Facts for Kids. Kiddle Encyclopedia.