Morningside is a suburb of Brisbane, Queensland, Australia. It is located 5 kilometres (3.1 mi) east of the CBD, and borders Cannon Hill, Norman Park, and Hawthorne.

At the time of the 2011 Census 47.8% of occupied dwellings in Morningside were detached houses, and 29.2% were semi-detached houses, while units accounted for a further 22.9%. There are many older-style weatherboard and chamferboard homes in this area as well as modern units and townhouses.

Morningside was named after a local estate belonging to David Longlands. The name of the estate itself likely referred either to the Scottish town, or to the estate's location on the eastern side of Brisbane.

The area was first settled by Europeans in the early 1870s. The land at that time was used mainly for agriculture; in particular, dairy, sugarcane, and tobacco production.

The old suburb of Colmslie was merged into Morningside.

At the corner of Bennetts and Wynnum Roads is the historic Bulimba Cemetery (also known as the Balmoral Cemetery) dating from 1875. Morningside started off as a rural area with small dairy and tobacco farms before becoming a popular residential area in the post-war boom.

Until 13 April 1969 electric trams skirted the western edge of the suburb, operating along Wynnum Road and Riding Road.

The Cairncross Dockyard was constructed in Morningside between 1942 and 1944. The facility closed in 2014, and as of 2016 was to be redeveloped into a commercial and residential area. 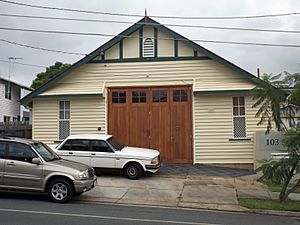 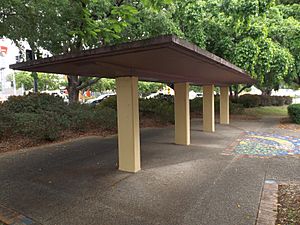 The Balmoral Cemetery is located at the corner of Wynnum and Bennetts Road, Morningside. Opened in 1875, this is no longer an active cemetery, but existing graves can be re-used for family members. It is also known as Bulimba Cemetery and Morningside Cemetery and was historically known as Kangaroo Point Cemetery.

All content from Kiddle encyclopedia articles (including the article images and facts) can be freely used under Attribution-ShareAlike license, unless stated otherwise. Cite this article:
Morningside, Queensland Facts for Kids. Kiddle Encyclopedia.