Hawthorne is a suburb of the City of Brisbane, Queensland, Australia. In the 2016 census, Hawthorne had a population of 4,989 people.

Hawthorne is named after the hawthorne bushes that were planted in the 1850s and 1860s by the original settler William Baynes.

Hawthorne started as a farming district in the 1860s, and was gradually subdivided as Brisbane grew. This was helped by the introduction of ferry and tram services.

The 2011 Census recorded 4,775 residents in Hawthorne, of whom 50.5% were female and 49.5% were male. The median age of the population was 33; four years younger than the Australian median.

The Hawthorne Cinema complex, on Hawthorne Road, is a classic theatre, opened in the 1940s it contains a large curved screen - one of the largest in Brisbane, as well as 2 smaller screens. It is part of the Cineplex Australia chain of cinemas, also including the Balmoral, Southbank and the (newly opened) Victoria Point cinema complexes. Hawthorne is home to several parks, and has numerous public transport options and a CityCat stop. Lourdes Hill College is an independent girls college in the heart of Hawthorne, that opened in 1916. 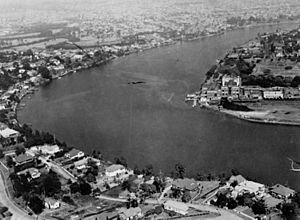 Aerial view of Hawthorne taken in 1947

Hawthorne has a number of heritage-listed sites, including:

Hawthorne is located under 2 km (1.2 mi) away from Morningside railway station, which provides Queensland Rail City network services to the Brisbane CBD and Cleveland.

Hawthorne is serviced by two bus routes, the 230 and the 232. Each bus route provides access to the Brisbane CBD, Fortitude Valley as well as other suburbs listed below.

The Hawthorne ferry wharf provides CityCat services to Brisbane CBD, South Bank Parklands, and other suburbs on the CityCat network.

All content from Kiddle encyclopedia articles (including the article images and facts) can be freely used under Attribution-ShareAlike license, unless stated otherwise. Cite this article:
Hawthorne, Queensland Facts for Kids. Kiddle Encyclopedia.