Fortitude Valley (often called "The Valley" by local residents) is an inner suburb of the City of Brisbane, the state capital of Queensland, Australia. In the 2016 census, Fortitude Valley had a population of 6,978 people. The suburb features two pedestrian malls at Brunswick Street Mall and Chinatown. 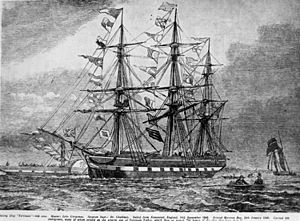 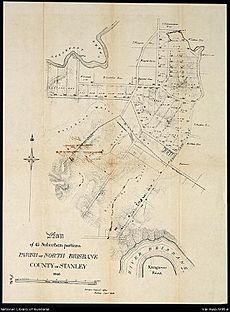 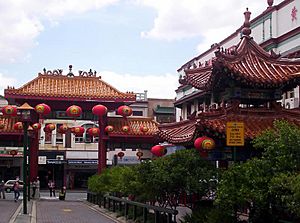 The Chinatown Mall was opened in 1987.

Scottish immigrants from the ship SS Fortitude arrived in Brisbane in 1849, enticed by Rev Dr John Dunmore Lang on the promise of free land grants. Denied land, the immigrants set up camp in York's Hollow waterholes in the vicinity of today's Victoria Park, Herston, Queensland. A number of the immigrants moved on and settled the suburb, naming it after the ship on which they arrived. A post office was established in 1887.

1891 saw the train line extended from the Brisbane central business district (the area around Queen Street) into Fortitude Valley, and Thomas Beirne opened a business on Brunswick Street. His business thrived and, after extension, he travelled to England in 1896, leaving his manager of two years, James McWhirter, in charge. Soon after his return, McWhirter established a competing drapery business opposite Beirne's in 1898. Beirne and McWhirter became keen rivals and are credited with establishing the Valley as a hub of commerce from the late 1890s.

In the late 19th century, commercial activities in Brisbane were divided along religious lines, with Protestant shopkeepers setting up along Queen and Adelaide Streets in the central business district, and shops operated by Roman Catholics in Stanley Street, South Brisbane. However, in the 1893 Brisbane flood (and again in 1897), major floods wiped out many shops in South Brisbane, and owners in that area decided to move and set up operations north of the river in an area free of flooding. The area they chose was Fortitude Valley. By that time Brisbane's horse-drawn tram system already centered on Fortitude Valley, making it the logical choice to establish a shopping precinct.

Fortitude Valley was also strongly advocated as the location of a new town hall in what became known as "the battle of the sites". Brisbane Town Council already purchased a piece of land in Fortitude Valley and supporters of the Fortitude Valley site pointed out that it would allow stronger foundations compared to the swampy site proposed at Adelaide Street in the existing commercial district. However, a petition was raised in support of the Adelaide Street site and with the support of Charles Moffatt Jenkinson, the mayor of Brisbane in 1914, it was chosen over the Fortitude Valley site. Jenkinson committed the council to that decision by selling the site in Fortitude Valley to the Catholic Church for the construction of the Holy Name Cathedral (a project that, although commenced, made little progress and was eventually abandoned).

From the early 1900s through to the 1960s, the thriving shopping precinct was dominated by McWhirters, Beirne's and, later, Overells' department stores. The Overells Building was completed in 1907. They were ultimately bought out by the Myer, David Jones and Waltons chains respectively with Overells being bought by Walton in 1956. Woolworths and Coles supermarkets and a host of smaller shops also flourished in the precinct during this period. Owing to its proximity to the central business district and the close concentration of public transport in the area, the Valley became the largest non-CBD shopping precinct in Australia through the 1950s and 1960s.

The rise of suburban shopping centres and the closure of the tram network in 1969 sounded the death knell for Fortitude Valley, with a gradual decrease in customers. David Jones closed its Valley store in the 1970s and Myer closed its doors in the early 1990s, and the once-thriving commercial centre devolved to dilapidation. In the 1970s and 1980s, the area fell into disrepute and, with the tacit support of police and government and illegal gambling houses set up shop. 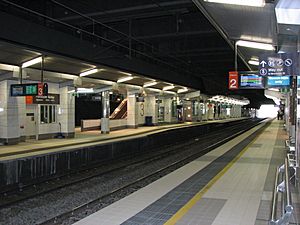 Brisbane Transport operates buses to, from and through Fortitude Valley. Fortitude Valley railway station serves all suburban and interurban lines, including Airport line service to Brisbane Airport. The station has four platforms and is located in Zone 1 of the TransLink integrated public transport system.

Secure taxi ranks to enable patrons to catch a taxi home are set up at various strategic points and enable easy access without the need to hail a cab. Fortitude Valley has five locations with these ranks on Friday and Saturday night. Funding for this free service is provided by the Brisbane City Council, the Queensland State Government and the Taxi Council of Queensland. These secure ranks are manned by taxi supervisors and security guards to ensure commuters an orderly and safe environment whilst they wait for service. 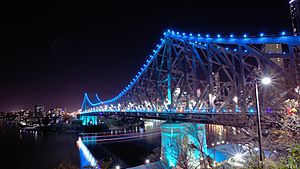 Story Bridge was constructed in 1940 to connect Fortitude Valley to Kangaroo Point.

Fortitude Valley has a number of heritage-listed sites, including:

All Hallows' School is a Catholic faith based private school in Fortitude Valley. It is said to be Queensland's oldest secondary school.

There were no government secondary schools in Fortitude Valley (the nearest was Kelvin Grove State College) until the start of 2020 when the new Fortitude Valley State Secondary College opened.

All content from Kiddle encyclopedia articles (including the article images and facts) can be freely used under Attribution-ShareAlike license, unless stated otherwise. Cite this article:
Fortitude Valley, Queensland Facts for Kids. Kiddle Encyclopedia.