Bowen Hills is an inner north-eastern suburb in the City of Brisbane, Queensland, Australia. In the 2016 census Bowen Hills had a population of 3,226 people. 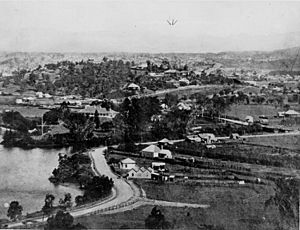 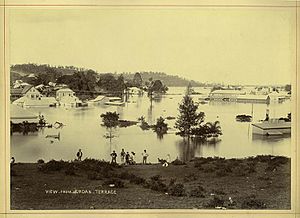 Bowen Hills was occupied by the indigenous Turrbal people, who named it Barrambin and it was a main campsite for the region. The area where the Exhibition and hospital stand was named Walan (Woolan), meaning Bream (fish). Early European settlement named the area York's Hollow "...which was all wild bush, and was a great fighting ground for the blacks". Barrambin was an important location for "kippa-ring" or initiation ceremony. Tribes from the coast would travel here to have their "kippa's" (young men) initiated.

In the mid-twentieth century Bowen Hills was well known as the location of the Cloudland dance hall. Cloudland's domed structure on top of a hill was a prominent landmark on Brisbane's northside. Cloudland was controversially demolished in 1982 to make way for an apartment development.

In the 2010s a number of new residential apartment complexes were constructed in the area, with a range of retail outlets catering to the growing population.

The median age of the Bowen Hills population was 30 years of age, 8 years below the Australian median.

49.0% of people were born in Australia. The next most common country of birth was New Zealand at 3.9%.

59.5% of people spoke only English at home. Other languages spoken at home included Mandarin 4.8% and Spanish 3.2%.

The most common response for religion was No Religion at 38.3%.

Bowen Hills has a number of heritage-listed sites, including: 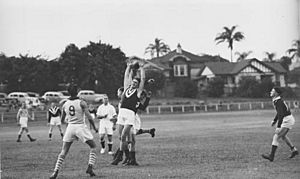 Bowen Park is a small public pleasure garden with a long history dating back to 1863. 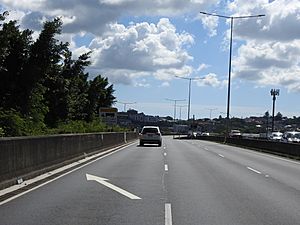 By train, Bowen Hills Station is also one of Queensland's busiest railway stations with all Queensland Rail City network services on all lines, including express trains, stopping there; many services in peak periods terminate at Bowen Hills. Bowen Hills is home to a large Queensland Rail maintenance and stabling depot.

By road, The TransApex infrastructure plans for Brisbane has several interconnections in Bowen Hills. The Clem Jones Tunnel (Clem7), Airport Link Tunnel and Inner City Bypass all have an entry/exit point in Bowen Hills and connect with each other at a spaghetti intersection.

The headquarters of Brisbane's two newspapers, The Courier-Mail and The Sunday Mail, are located on Campbell Street, Bowen Hills.

There are a growing number of retail outlets trading from and primarily catering to residents in the developing urban renewal area.

All content from Kiddle encyclopedia articles (including the article images and facts) can be freely used under Attribution-ShareAlike license, unless stated otherwise. Cite this article:
Bowen Hills, Queensland Facts for Kids. Kiddle Encyclopedia.