The Old Museum Building is a heritage-listed former exhibition building, former museum and now performance venue in Bowen Hills, Brisbane, Queensland, Australia. It is made from 1.3 million red bricks and bordered by Gregory Terrace and the Exhibition Grounds. 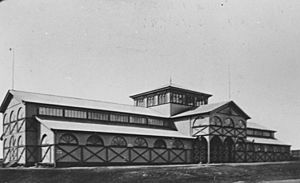 The Old Museum was originally called the Exhibition Building and Concert Hall. It was built in 1891 for the Queensland National Agricultural and Industrial Association after Brisbane's first exhibition building, which had occupied the land, was destroyed by fire on 13 June 1888. At the time of the fire the building was being used as a skating rink.

The land had been used by the Queensland Acclimatisation Society from 1863-1875.

The new exhibition building was designed by the architect George Henry Male Addison (1857–1922). The style of the building may best be described as progressive eclecticism or Indo-Saracenic. The edifice was built over a period of 12 months by over 300 workers. It is entered in the Queensland Heritage Register.

The Queensland Government took over control of the building and grounds when the National Association was forced into liquidation by the economic depression in 1897.

In 2016, the building was taken back for Ekka and has since been used for the flower and garden displays.

The play Troilus and Cressida by William Shakespeare, was also presented in the Old Museum building in 1989. Members of the cast included Geoffrey Rush, Jane Menelaus and Russell Dykstra.

The Old Museum building was also used as one of the sites for the 1980s Australian series of Mission: Impossible.

Photographs of the Old Museum

The building was listed on the Queensland Heritage Register on 21 October 1992.

In 2009 as part of the Q150 celebrations, the Old Museum Building was announced as one of the Q150 Icons of Queensland for its role as a "structure and engineering feat".

All content from Kiddle encyclopedia articles (including the article images and facts) can be freely used under Attribution-ShareAlike license, unless stated otherwise. Cite this article:
Old Museum Building, Brisbane Facts for Kids. Kiddle Encyclopedia.