The Queensland Museum is the state museum of Queensland, dedicated to natural history, cultural heritage, science and human achievement. The museum currently operates from its headquarters and general museum in South Brisbane with specialist museums located in North Ipswich in Ipswich, East Toowoomba in Toowoomba, and in Townsville City in Townsville.

The museum is funded by the Queensland Government. 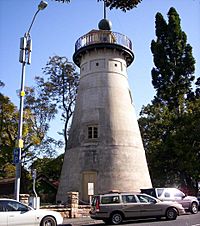 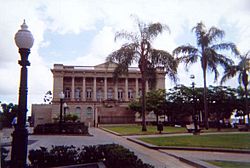 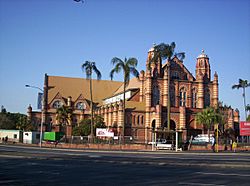 The Queensland Museum was founded by the Queensland Philosophical Society on 20 January 1862, one of the principal founders being Charles Coxen, and had several temporary homes in Brisbane, Queensland, Australia. The temporary homes included: The Old Windmill (1862–1869), Parliament House (1869–1873) and the General Post Office (1873–1879). The first professional curator was Karl Theodor Staiger.

The Queensland Government built a home for the Museum in William Street (later called the John Oxley State Library), with Queensland Museum moving there in 1879. The museum occupied the William Street location for 20 years.

In 1899, the Queensland Museum moved into the Exhibition Hall (now called the Old Museum), on Gregory Terrace in the Brisbane suburb of Bowen Hills, remaining there for 86 years.

The Queensland Museum now operates at a number of locations.

Queensland Museum & Sciencentre is located at South Brisbane at the heart of Brisbane’s cultural precinct alongside the State Library of Queensland, the Queensland Art Gallery, the Gallery of Modern Art and the Queensland Performing Arts Centre.

Queensland Museum connects visitors to Queensland, its people and their stories of the past, present and future.

The Museum is also a world-class research facility in the fields of biodiversity, geoscience and cultural history.

Queensland Museum is home to the Sciencentre, which offers hands-on, interactive activities for kids and grown-ups alike that reveal the science behind our everyday lives.

The Workshops Rail Museum opened in August 2002 and is housed in the North Ipswich Railway Workshops. The collection includes 15 items of rolling stock and thousands of smaller items. Some operational steam locomotives from the Queensland Rail Heritage Fleet are often placed on display within the museum when not required for main line use.

In 1987, when the Queensland Museum required more room to display its horse-drawn coaches and carriages, the museum opened its Cobb & Co Museum campus in Toowoomba, Queensland.

Cobb+Co Museum is home to the National Carriage Collection. The museum's collection includes examples of a vast range of vehicles from the horse-drawn era, from farm wagons and delivery carts to the Rolls Royce of Carriages, the landau.

The Museum of Tropical Queensland is located in Townsville. The star attraction is the HMS Pandora gallery. Sent to catch the famous HMS Bounty and her mutinous crew, the Pandora sank off the coast of Cape York in 1791. Hundreds of artefacts have been recovered from the wreck and are on display.

The most popular area for kids is the MindZone, an interactive science centre. Other galleries celebrate the rainforest, corals and marine creatures from the deep sea and fossil past.

Links to the Queensland Performing Arts Centre and Busway

Both a tunnel and pedestrian bridge connect the Museum and Art Gallery buildings with the Queensland Performing Arts Centre. Three lifts were added to the bridge in 2004 to provide access to the platforms of the Cultural Centre busway station. There is a large sculpture of a Cicada in front of the centre lift, possibly because the Cultural Centre busway station is the bus stop for the museum.

All content from Kiddle encyclopedia articles (including the article images and facts) can be freely used under Attribution-ShareAlike license, unless stated otherwise. Cite this article:
Queensland Museum Facts for Kids. Kiddle Encyclopedia.