The Queensland Performing Arts Centre (also known as QPAC) is part of the Queensland Cultural Centre and is located on the corner of Melbourne Street and Grey Street in Brisbane's South Bank precinct.

QPAC was designed by local architect Robin Gibson in the mid-1970s, after State Cabinet formally recognised in 1972 the need for a new Queensland Art Gallery and a new major performing arts centre, in addition to a new location for the Queensland Museum and State Library. It was opened by the Duke of Kent in 1985.

Opening with only 3 stages, the Lyric Theatre, the Concert Hall and the Cremorne Theatre, the Centre was designed with expansion in mind. In 1998 the Playhouse was opened, ending the original extension plans. A fifth and likely final Theatre (seating 1500-1700) was announced in late May 2018 with a budget of $125 million. Completion is aimed for 2022. Currently tenders are being sought for its design.

In 2017, QPAC hosted more than 1.3 million visitors to more than 1,200 performances, given the city population of Brisbane at 2.4 million, with the South East Queensland area's population sitting at 3.5 million and the entire State of Queensland at 5 million.

Each year QPAC hosts over 1,200 performances across its four theatres and outdoor spaces. The centre's versatile venues accommodate a wide variety of performance including dance, musicals, theatre, opera, comedy and contemporary and classical music concerts featuring leading Queensland, Australian and international actors, dancers, musicians, artists and companies. In addition, QPAC co-produces and invests in some of Australia's most innovative and successful shows and free outdoor programs.

QPAC produces the Out of the Box Festival for children 8 years and under, and Clancestry program, as part of the QPAC First Nations Program which recognises the significant role First Nations Peoples have contributed and continue to contribute to Queensland’s historical, creative and cultural landscapes. 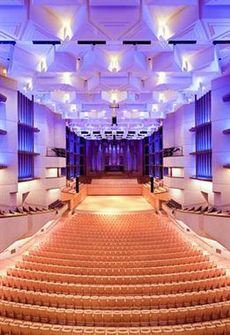 In May 2018, the Queensland Government and QPAC announced funding had been secured for The New Performing Arts Venue to be located on the Playhouse Green, adjacent to the current complex. The new theatre is projected to be completed by late 2022, and will seat a minimum of 1,500 patrons.

Groups with programs at QPAC include:

All content from Kiddle encyclopedia articles (including the article images and facts) can be freely used under Attribution-ShareAlike license, unless stated otherwise. Cite this article:
Queensland Performing Arts Centre Facts for Kids. Kiddle Encyclopedia.