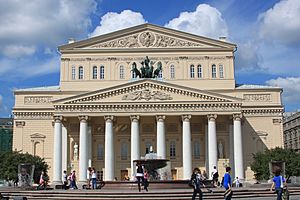 The origin of the Bolshoi is found in the creation of a dance school for a Moscow orphanage in 1773. In 1776, dancers from the school were employed by Prince Pyotr Urusov and the English theatrical entrepreneur Michael Maddox to form part of their new theatre company. They performed in privately owned venues. Later they acquired the Petrovsky Theatre. The theatre would later be rebuilt as today's Bolshoi Theatre.

The early history of the Bolshoi Ballet is very sketchy. The company staged many famous ballets. It struggled to compete with the Imperial Russian Ballet of St Petersburg. It was not until Alexander Gorsky became Ballet Master in 1900 that the company began to develop its own unique identity. The company was acclaimed for productions of new or restaged ballets including, Don Quixote (1900), Coppélia (1901), Swan Lake (1901), La fille mal gardée (1903), Giselle (1911), Le Corsaire (1912) and La Bayadère (1917).

All content from Kiddle encyclopedia articles (including the article images and facts) can be freely used under Attribution-ShareAlike license, unless stated otherwise. Cite this article:
Bolshoi Ballet Facts for Kids. Kiddle Encyclopedia.