The city has a high human growth index among Brazilian municipalities, occupying the 21st national position. One study pointed to Joinville as the second best city to live in Brazil. Joinville holds the titles of "Brazilian Manchester", "City of Flowers", "City of Princes", "City of Bicycles" and "City of Dance". It is also known for hosting the Joinville Dance Festival (considered the largest dance festival in the world), the Bolshoi Ballet School in Brazil (the only one in the world outside of Russia) and Joinville Esporte Clube.

In 2017, the population of Joinville was estimated at 577,077 people, many of whom are of German, Swiss, Norwegian and Italian descent. Owing to urban development and relatively good infrastructure, Joinville has become a major center for events and business conferences. The city has one of the highest standards of living in Latin America. 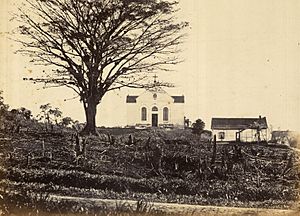 Dona Francisca German colony in Joinville during the reign of Emperor Brazil, 1886

The area surrounding Joinville has been inhabited by the Tupí people for approximately 7,000 years.

Even though it is considered a German-Brazilian city, its name is French. The city's former name was Colônia Dona Francisca (Lady Francisca Colony), but was changed to Joinville in 1851.

A Royal Palace was built in 1870. In 1851, the French prince, after a financial crisis, sold almost all his lands in Southern Brazil to the German Senator Mathias Schröder. Senator Schröder was a member of the Colonization Society of Hamburg. This society, made up of bankers, businessmen and merchants, attracted immigrants to be sent to Brazil and thereby establish commercial ties between Germany and the German communities in Brazil. In 1851, the first 118 German and Swiss immigrants arrived, followed by 74 Norwegian immigrants.

From 1850 to 1888, Joinville received 17,000 German immigrants, most of them Lutherans, poor peasants coming to occupy this part of Brazil. 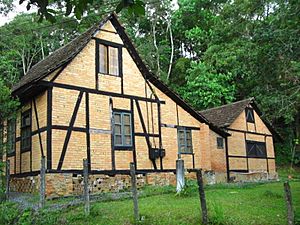 The half-timbered house is an inheritance of the Germanic colonization

The city of Joinville was founded by Norwegian-, Swiss- and German settlers on March 9, 1851. Immigrants from Norway made up a group of men with several professional qualifications, including carpenters, masons, bakers, agriculturalists, and even a veterinarian and physician. Many of the first Norwegian settlers became ill by dysentery, typhoid, and other illnesses. A monument was erected by Rio Cachoeira in the city centre in 2001, in honor of the Norwegian, Swiss, and German settlers. 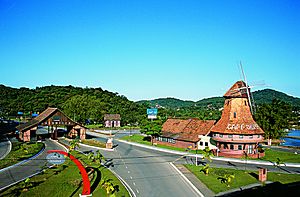 Joinville is famous for its strong German-influenced culture. The city retains many aspects of German culture, in its architecture, in the local dishes, parties and in the way of life of its inhabitants.

Joinville is the host city of the Festival de Dança de Joinville (Joinville Dance Festival) which is the world's largest dance event, held every year during the month of July. Joinville is the only city outside of Moscow to have a school of the Bolshoi Ballet, the renowned Russian Ballet Company. The city is home to a Catholic bishop, several Lutheran churches (one of the largest communities in Brazil), a Botanical Garden and a Zoo. Parks, and several beaches are less than an hour's drive away from the city. Joinville is also home to several museums including the "MUBI" bicycle museum.

The Royal Palace, built in the mid-19th century, nowadays is a designated National Museum of Immigration History, specifically detailing the struggle and hardship German immigrants went through on their journey to Brazil in the 1800s. It has furniture and costumes dating back to the mid-19th century.

All content from Kiddle encyclopedia articles (including the article images and facts) can be freely used under Attribution-ShareAlike license, unless stated otherwise. Cite this article:
Joinville Facts for Kids. Kiddle Encyclopedia.