The South region of Brazil in red.

The South Region of Brazil is one of the five administrative regions of Brazil. It includes the states of Paraná, Santa Catarina and Rio Grande do Sul and covers 576,300.8 km², being the smallest portion of the country. It is a great tourist, economic and cultural pole. It borders Uruguay, Argentina, and Paraguay as well as the Center-West Region, the Southeast Region and the Atlantic Ocean. The region received many immigrants of Europe during the 19th century, who largely influenced the demography and cultural aspects of it. The main ethnic groups of Southern Brazil are Brazilians of Portuguese, German and Italian descent. 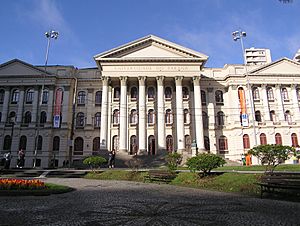 The Universidade Federal do Paraná - UFPR ("Federal University of Paraná") is the oldest Brazilian university. 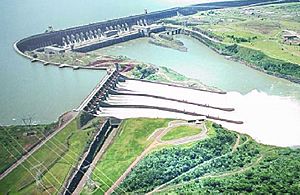 The largest dam of the world was built, the Hidroelétrica de Itaipú, in Paraná.

It is the only region of Brazil located outside the tropical zone, with clear variations about the seasons. In winter there are frosts and rarely snow. The relief is just a bit hilly, with a predominance of a large plateau, in general low.

What most characterizes the South is the way it was colonized and kind of colonizers received. Received short black slaves, but many Caucasian immigrants. The Europeans gave the population the predominance of white skin color, gave to the landscape marks of their original countries and introduced the system of medium and small farms.

The southern region has good social indicators : it has the highest HDI in Brazil (0.831), and the third highest GDP per capita of the country. The region is also, 94.8% of the population.

The region is highly urbanized (82%) and many cities are famous for their urban planning, like Curitiba and Maringá. It has a relatively high standard of living in many aspects, with the highest Human Development Index of Brazil, 0.859 (2007), and the second highest per capita income of the country, $13.396. The region is also the most literate, 94% literacy rate.

Some places in the region must be emphasized, such as the Iguaçu Falls, (Natural Heritage and one of the New7Wonders of Nature) and the Ruins of St. Michael of the Missions (Cultural Heritage); the Itaipu Dam (the largest dam of the world, elected the as one of the seven modern Wonders of the World); the winter cities on mountains of the SC and RS; and the Botanical Garden of Curitiba, Southern Brazil greatest icon.

The ruins of St. Michael of the Missions is a Unesco World Heritage site, in Rio Grande do Sul.

The first inhabitants of southern Brazil are the indigenous people. Then came the Spanish Jesuit priests to evangelize the Indians and dominate the land. The pioneers of São Paulo attacked the missions to arrest the Indians. So, the Jesuits and the Indians abandoned the place and the cattle got loose in the fields. The São Paulo pioneers became interested in the trade of cattle. On the way through which the troops passed villages have emerged. For many years, the Portuguese and Spaniards fought over land in the region.

The population of the South has grown with the arrival of the first European immigrants in the nineteenth and twentieth centuries: Germans, Italians, Poles, Ukrainians immigrated to the region, which also received Japanese, Arabs and Jews. 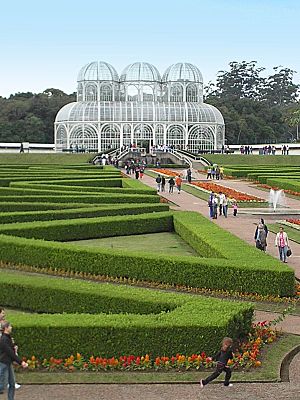 The Botanical Garden of Curitiba is the unofficial symbol of the region.

The city of Blumenau, in Santa Catarina, have the largest oktoberfest outside Germany.

The region received large numbers of European immigrants during the 19th century, who have had a large influence on its demography and culture. The main ethnic origins of Southern Brazil are Portuguese, Italian, and German.

Portuguese, the official language of Brazil, is spoken by the entire population. But in some places dialects of German or Italian origins are also spoken; some villages even use the language of immigrants. In Porto Alegre and Curitiba there are some Yiddish speakers.

View of the Iguaçu Falls (Foz do Iguaçu, Paraná), one of New 7 Wonders of Nature, the second most visited place by foreign tourists in Brazil and first in the south.

The hydrography of Southern Brazil can be classified in three great regions of Watersheds: the Paraná River, the Uruguay River and the Southeast Brazil Rivers.

The rivers of the southern region are availed for navigation, irrigation agriculture, urban water supply and power generation. The most important rivers are voluminous and have great hydroelectric potential. The Itaipu Dam, on the Parana River, is exploring the potential for power generation in the region. This operation allows the South and the Southeast an increasing use of electricity for domestic and industrial use.

Only Brazilian region located almost entirely in a subtropical climate, the South is the coldest area of Brazil, with frost and even, in some places, the snowfall. The seasons are well defined and the rains are evenly distributed over the year.

Southern Brazil has subtropical or temperate climate. The annual average temperatures vary between 12 °C (53.6 °F) and 22 °C (71.6 °F). Frost is very common and can snow in some mountain ranges. 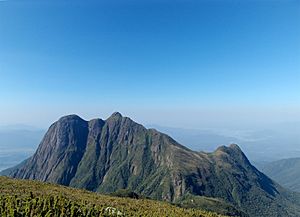 Pico Paraná, the highest mountain in the Southern Brazil, Paraná.

The relief of the region is characterized by many plateaus that rises at altitudes up to more than 1,000 meters above sea level, decreasing altitude in the west, where the Paraná River at altitudes from 100 to 300 meters. Covering about 3/4 parts of the regional relief, this set is called Southern Plateau of Brazil and breaks down into plateaus that go from east to west. 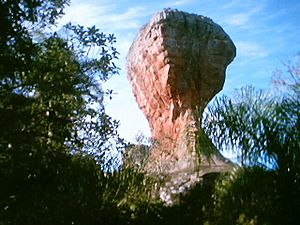 State Park of Vila Velha, with great rocky formations sculptured by the erosion of rain and wind, in Paraná.

The region has as main tourist attractions their natural beauty, beaches, historical cities and their European colonies, and the well-defined seasons, characterized by the severe winter.

In Paraná, the Iguassu Falls receive thousands of tourists every year, being the main destination for foreigners in the region. The state also has a geological site of approximately 340 million years, with huge rock formations. The capital, Curitiba, was considered the best southern city for tourism .

In Santa Catarina the beaches receive many visitors, and the winter colonies in the state.

The Rio Grande do Sul state - like Santa Catarina - attracts tourists in winter to the cities in mountain, where the cold is intense.

All content from Kiddle encyclopedia articles (including the article images and facts) can be freely used under Attribution-ShareAlike license, unless stated otherwise. Cite this article:
South Region of Brazil Facts for Kids. Kiddle Encyclopedia.