People of Europe facts for kids 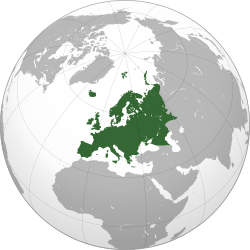 The major religion in Europe is Christianity. Most countries in Europe have a majority of people who are Christian - generally Roman Catholic (most of southern Europe, central Europe and Ireland), Protestant varieties (the UK, Germany and parts of central Europe) and Orthodox (eastern and south-eastern Europe). Large minorities of Jews live in the UK and France (and Poland, Germany and central Europe in the past). Turkey, Albania, Kosovo and Azerbaijan have majority Muslim populations with large numbers also in Bosnia Herzegovina and Russia. Several countries including Czech Republic, Estonia and the United Kingdom have large numbers of people who don't follow any religion. 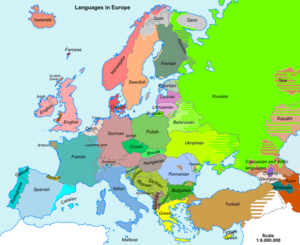 Over 100 languages are spoken today in Europe and many hundreds of others were spoken in the past. The [[../EU|European Union]] has 24 official languages although there are 28 countries in the EU. This is because some languages are spoken in more than one country. English is spoken in the United Kingdom, Ireland and Malta. German is an official language in Germany, Austria and parts of Belgium. French is spoken in France and Belgium. Russian is the main language in Russia and is also spoken by large numbers of people in Ukraine, Belarus and other countries which were formerly part of the Soviet Union. Italian is spoken in Italy and also in parts of Slovenia and Croatia.

The most spoken native EU language is German. English is spoken by more people as a second language than any other language in the EU.

There are many languages in Europe which don't have large numbers of native speakers like Manx and Kashubian.

All content from Kiddle encyclopedia articles (including the article images and facts) can be freely used under Attribution-ShareAlike license, unless stated otherwise. Cite this article:
People of Europe Facts for Kids. Kiddle Encyclopedia.