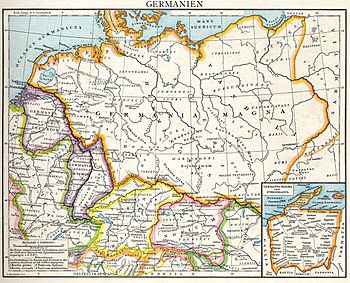 Germania was a Roman name originally given to tribe of people who lived along the Rhine River. They were a Teutonic people, who were first mentioned in the 4th century BC. The Gauls changed it from a name for a people to the name for the territory. This was a vast forested wilderness to the north that Rome knew very little about. It ran from the west on the River Rhenus (Rhine) to the east and the Carpathian Mountains and the River Vistula. On the north it was bounded by the North Sea and on the south by the River Hister (Danube).

Germania was home to a very large number of Germanic and a few Celtic tribes. The northern provinces of Germania were called "Germania Inferior". Some of the tribes known to live here were the Menapii, Batavi, Condrusi, Atuataci and Eburones. Close to the Roman fortifications on the east side of the Rhine lived the Frisii, Chauci, Istavones, Sicambri, Marsii, Cattii, and Ubii tribes. The Ubii were friendly with the Romans and provided cavalry as well as guarded the border for the Romans.

During the Gallic War, Julius Caesar ended the Germanic presence in Alsace by destroying Ariovistus. He built a bridge across the Rhine in 55 BC and entered Germania. He convinced the Suebi and other tribes not to interfere in Gaul, which was Roman territory. Other than venturing into Germania a second time in 53 BC and warring against several tribes, he left Germania alone. This established the Rhine as the boundary between Germania and Roman Gaul. From 49–45 BC, Caesar was occupied by the Civil War. He was then assassinated in 44 BC.

The beginnings of the occupation of Germania by Rome was in 15 BC. The Foothills of the Alps were conquered during the reign of Augustus. This, together with the lands west of the Rhine conquered by Caesar became their foothold. The Romans attempted to bring under Roman rule the lands as far north as the River Elbe. In 7 AD Rome assumed Germania was under Roman rule when Publius Quinctilius Varus became governor of Roman occupied Germania. Since they were so powerful, the Romans did not count on any resistance from the German tribes.

Battle of the Teutoburg Forest 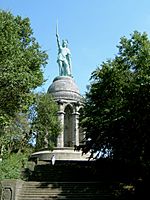 In 9 AD Varus with three legions of top Roman troops, were moving up to a permanent base on the Rhine. There had been reports of a Rebellion by local tribes which Varus intended to deal with. Varis was confident that it would be easy to occupy Germany. He was a good administrator but not a soldier. While marching through the Teutoburg Forest, three crack legions of Rome’s army were caught in an ambush. For three days up to 30.000 Roman soldiers, their families and slaves were killed by the peoples they called barbarians. The battle was Rome's greatest defeat.

Arminius, the German leader, understood both the strengths and weaknesses of the Roman army. He knew not to attack Roman legions in open battle. In the Teutoburg Forest he lured the 17th, 18th and 19th legions into an ambush. The battle was fought in several places during the encounter. Those who were not killed were taken captive. When Emperor Augustus heard the news he supposedly cried out "Quintilius Varus, give me back my legions!" The numbers XVII (17), XVIII (18) and XIX (19) were never again used as legion numbers.

Germanicus was ordered to avenge the loss of the legions. In 14 AD he started the conquest of Germania again. However after two years he decided he had done enough to avenge Rome's great loss and returned to Rome. He left Germania to their own feuds. Arminius was murdered in 21 AD by relatives because of internal fighting.

All content from Kiddle encyclopedia articles (including the article images and facts) can be freely used under Attribution-ShareAlike license, unless stated otherwise. Cite this article:
Germania Facts for Kids. Kiddle Encyclopedia.