The Dying Gaul. Copy of a statue of the 3rd or 2nd century BC. 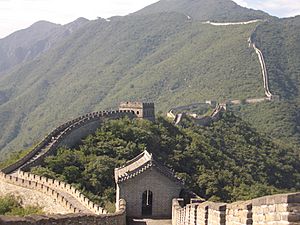 The purpose of the Great Wall of China was to stop the "barbarians" from crossing the northern border of China.

In modern use, the word is used to refer to an uncivilized or uncultured person.

In Ancient Rome, the name βάρβαρος, bárbaros, was given to all those who did not speak the Greek language. Later, the term Barbarian came to mean "Anyone who is not Greek". Later again, it meant "anyone who is outside the Roman Empire".

In the early modern period and sometimes later, the Byzantine Greeks used it for the Turks.

In Ancient China, references to barbarians go back as far as the Shang Dynasty and the Spring and Autumn Annals.

All content from Kiddle encyclopedia articles (including the article images and facts) can be freely used under Attribution-ShareAlike license, unless stated otherwise. Cite this article:
Barbarian Facts for Kids. Kiddle Encyclopedia.