The Byzantine Greeks (or Byzantines) were the Greek people of Late Antiquity and the Middle Ages. They lived in the lands of the Byzantine Empire (or Eastern Roman Empire) like Greece, Asia Minor and Cyprus. They spoke medieval Greek, preserved Greek culture, obeyed Roman law and followed Eastern Christianity. Their society had peasants, traders, teachers, soldiers and priests.

The Byzantines called themselves Romans (Romaioi), Greeks (Graikoi) and Christians (Christianoi) throughout their history. They used those names synonymously because they were the political heirs of the Roman Empire, the offspring of the ancient Greeks, and believers in Jesus Christ. The Byzantines also called everything that was not Greek "barbarian". 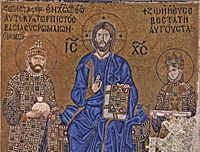 11th century Hagia Sophia mosaic. On the left, Constantine IX "Emperor faithful in Christ the God, king of the Romans". 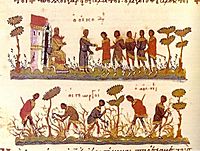 Scenes of agricultural life in a Byzantine Gospel of the 11th century.

Byzantine Greek society had different classes like the poor, the peasants, the soldiers, the teachers, the merchants, and the priests.

There were two groups of poor people in the Greek world since the time of Homer: the ptochos (πτωχός, "passive poor") and the penes (πένης, "active poor"). Byzantine Greek peasants lived in villages, drank wine and ate grains, beans, fish, bread and olives. They were hunters, fishers, bee-keepers, craftsmen, smiths, tailors and shoemakers.

Soldiers were chosen for military duty every year and served as medics and technicians. Their appearance, customs, habits and life were part of a Greek and Roman military tradition. Along with farmers, they ate a type of dried biscuit bread called a paximadion (originally called a boukelaton).

Literacy was much higher in the Byzantine Empire than in Western Europe. Elementary school education was widely available in places like towns and the countryside. Secondary schools were mostly in larger cities and higher education was offered at the University of Constantinople.

The life of a Byzantine Greek woman was split into three stages: 1) girlhood, 2) motherhood and 3) widowhood. Daily life for women included doing household and farm chores. Poor women sometimes wore sleeveless tunics and most wore a veil called the "maphorion" that covered their hair. Wealthy women bought and wore silk fabrics and clothes with expensive jewelry. Some women worked as traders, clerics and teachers.

Byzantine Greek traders were mobile and developed new methods of investing money like the "chreokoinonia". Byzantine Greek priests were close to the rest of society and were allowed to get married (except for bishops).

All content from Kiddle encyclopedia articles (including the article images and facts) can be freely used under Attribution-ShareAlike license, unless stated otherwise. Cite this article:
Byzantine Greeks Facts for Kids. Kiddle Encyclopedia.