Aesop, or Æsop (from the Greek Αἴσωπος Aisopos), is known for his fables. He was, by tradition, a slave of African descent who lived from about 620 BC to 560 BC in Ancient Greece.

Aesop's Fables are still taught as moral lessons and used as subjects for entertainment, especially children's plays and cartoons. Aesop is said to have written thousands of fables, but none has been verified. This means we do not know whether he wrote any, or perhaps just collected them. His most famous one was perhaps The Lion and the Mouse. 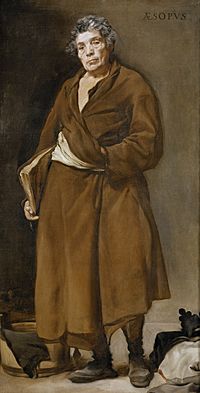 Portrait of Aesop by Velázquez in the Prado Museum, Spain

No writings by him survive. Tales credited to him were gathered across the centuries and in many languages. This is a storytelling tradition that continues to the present day. Many of the tales have animals and inanimate objects that speak, solve problems, and generally have human characteristics.

The tradition is that he was at one point freed from slavery and that he eventually died at the hands of Delphians. In fact, the doubt about his life has led some to deny his existence altogether.

His most famous fable is a parable of the tortoise and the hare. In this story, a rabbit challenges a tortoise to a race. The rabbit is sure of its victory and as a result, depending on the version of the story, in some way completes the race slower than the turtle. Often, the hare takes a nap or takes too many breaks. The persistent tortoise, despite being slower, wins because it persevered. 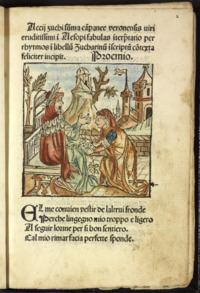 The place of Aesop's birth was and still is disputed: (Africa)Thrace, Phrygia, Egypt, Ethiopia, Samos, Athens, Sardis and Amorium all claimed the honour. It is thought by modern writers that he may have been of African origin, it is said that his name is likely derived from "Aethiopian", a word used by the Greeks to refer mostly to dark skinned people of the African interior and that the stories are full of animals present in Africa, many of the creatures being quite foreign to Greece and Europe.

Aesop was also briefly mentioned in the classic Egyptian myth, "The Girl and the Rose-Red Slippers", considered by many to be history's first Cinderella story. In the myth, the freed slave Rhodopis mentions that a slave named Aesop told her many entrancing stories and fables while they were slaves on the island of Samos.

According to the historian Herodotus, Aesop met with a violent death at the hands of the inhabitants of Delphi, though the cause was not stated.

Aesop's Fables or Aesopica refers to a collection of fables credited to Aesop. Aesop's Fables has also become a blanket term for collections of brief fables, usually involving personified animals.

The fables remain a popular choice for moral education of children today. Many stories included in Aesop's Fables, such as The Fox and the Grapes (from which the idiom "sour grapes" was derived), The Tortoise and the Hare (see Zeno's paradoxes) and The Shepherd Boy and the Wolf (also known as The Boy Who Cried Wolf), are well-known throughout the world.

All content from Kiddle encyclopedia articles (including the article images and facts) can be freely used under Attribution-ShareAlike license, unless stated otherwise. Cite this article:
Aesop Facts for Kids. Kiddle Encyclopedia.