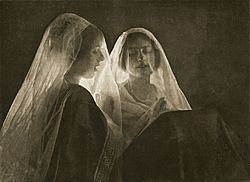 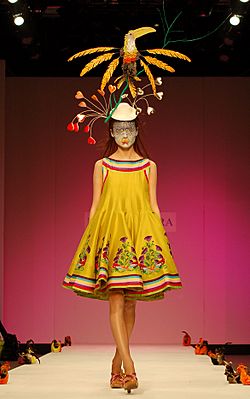 'Veil' is also used figuratively. This is a telescopic photograph of the Veil Nebula in the constellation of Cygnus. It is the remains of a supernova.

A veil is a soft covering of all or part of the face. It has often been used by women in many cultures. It is often used by brides on their wedding day. It may have religious meaning, or it may be used for pleasure or dance. It is different from a mask because a mask is close-fitting, and often firm or hard, while a veil is soft and may fit loosely.

Veils are a kind of non-verbal communication. They always have some kind of unspoken message.

The most important part of the head (for the viewer) is the face, because the human face takes part in communication. Covering it says, in effect, 'this person is not available'. That is why it has been used so often by women. Because it is of soft material, the veil may be lifted back over the head or unclipped from one side. This is also a signal. It says 'now I am available'. So brides lift their veil at the point when they are married.

Veils may be, and often are, partly transparent. This adds ambiguity and mystery to the 'message' it offers the viewer; it is a 'fashion statement'. The raising or dropping of veils is a sign of intimacy: the wearer, who was covered, is now in the open. Extreme example: Salome and the (fictional) dance of the seven veils.

All content from Kiddle encyclopedia articles (including the article images and facts) can be freely used under Attribution-ShareAlike license, unless stated otherwise. Cite this article:
Veil Facts for Kids. Kiddle Encyclopedia.