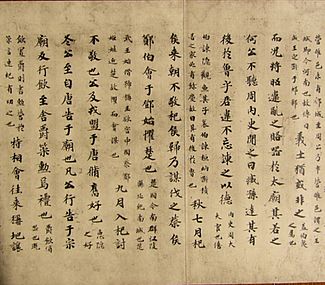 The Spring and Autumn Annals or Chunqiu is an ancient Chinese chronicle that has been one of the core Chinese classics since ancient times. The Annals is the official chronicle of the State of Lu, and covers a 241-year period from 722 to 481 BC. It is the earliest surviving Chinese historical text to be arranged in annals form. Because it was traditionally regarded as having been compiled by Confucius (after a claim to this effect by Mencius), it was included as one of the Five Classics of Chinese literature.

The Annals records main events that occurred in Lu during each year, such as the accessions, marriages, deaths, and funerals of rulers, battles fought, sacrificial rituals observed, celestial phenomena considered ritually important, and natural disasters.

All content from Kiddle encyclopedia articles (including the article images and facts) can be freely used under Attribution-ShareAlike license, unless stated otherwise. Cite this article:
Spring and Autumn Annals Facts for Kids. Kiddle Encyclopedia.