Battle of the Teutoburg Forest facts for kids 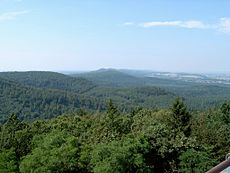 This was more than a victory, it was the complete destruction of three Roman legions and all their commanders; the few men who survived were made slaves. It was one of the two greatest disasters in Roman military history (the other being at the Battle of Cannae). Apart from occasional raids and campaigns, the Romans never again held the Germanic land across the Rhine.

The battle began a seven-year war which ended with the Rhine as the boundary of the Roman Empire for the next four hundred years, until the decline of the Western Roman Empire.

The Roman commander, Varus, was about the fourth most important man in Rome. He was known and feared because of his ruthless actions and his crucifixion of defeated enemies. It is certain this was known to the Germans, and may have helped the tribes come together to resist him.

The German commander was Arminius, who had been given a Roman military education. He had spent his youth in Rome as a hostage. Therefore, he knew Roman military methods: this knowledge was to be crucial.

Later, Arminius returned to Germania with Varus, and became his trusted advisor. In secret, he forged an alliance of Germanic tribes that had traditionally been enemies. He was helped to do this by the anger over Varus' insolence and cruelty to the people he defeated.

"...Stratagem was, therefore, indispensable; and it was necessary to blind Varus to their schemes until a favorable opportunity should arrive for striking a decisive blow..." British historian Edward Shepherd Creasy (1812–1878)

While Varus was on his way from his summer camp, west of the Weser river, to the winter headquarters near the Rhine, he heard reports of a local rebellion. This was faked by Arminius.

"...This was represented to Varus as an occasion which required his prompt attendance at the spot; but he was kept in studied ignorance of its being part of a concerted national rising; and he still looked on Arminius as his submissive vassal..." Edward Shepherd Creasy

Recent archaeological finds place the battle at Kalkriese Hill in Osnabrück County, Lower Saxony. The Romans must at this time have been marching northwestward from the area that is now the city of Detmold, passing east of Osnabrück; they must then have camped in this area before being attacked.

Varus's forces included three legions, six cohorts of auxiliary troops (non-citizens or allied troops) and three squadrons of cavalry. Many of them had little combat experience with Germanic fighters under local conditions.

The Roman forces were not marching in combat formation, and there were also large numbers of camp-followers. As they entered the forest they found the track narrow and muddy; according to Dio Cassius a violent storm had also arisen. He also writes that Varus neglected to send out advance reconnaissance parties.

The line of march was dangerously stretched out – estimates are that it was more than 15 km (9 miles), and was perhaps as long as 20 km (12 miles). It was then suddenly attacked by Germanic warriors who were carrying some light swords, large lances and spears that came with short and narrow blades, so sharp and warrior friendly that they could be used as required. The Germanic warriors surrounded the entire Roman army and rained down javelins on the intruders.

The Romans were able to set up a fortified night camp, and the next morning broke out into open country, near the modern town of Ostercappeln. The break-out cost them heavy losses, as did a further attempt to escape by marching through another forest area, with heavy rains continuing. The rain stopped them from using their bows because sinew strings become slack when wet, and left them virtually defenseless as their shields also became waterlogged.

The Romans then began a night march to escape, but marched into another trap that Arminius had set, at the foot of a hill near Osnabrück. There, the sandy, open strip on which the Romans could march easily narrowed at the bottom of the hill. There was a gap of only about 100 m between the woods and the swampland at the edge of the Great Bog. The road was blocked by a trench, and, towards the forest, an earthen wall had been built along the roadside. This let the tribesmen to attack the Romans from cover.

The Romans made a desperate attempt to storm the wall, but failed. The Germanic warriors then stormed the field and slaughtered the Romans; Varus committed suicide.

Around 15,000–20,000 Roman soldiers must have died; not only Varus, but also many of his officers are said to have taken their own lives by falling on their swords in the approved manner. Tacitus wrote that many officers were sacrificed by the Germans as part of their indigenous religious ceremonies, cooked in pots and their bones used for rituals. However, others were ransomed, and some of the common soldiers were enslaved.

The victory over the legions was followed by a clean sweep of all Roman forts, garrisons and cities – of which there were at least two – east of the Rhine. The remaining two Roman legions in Germany were stationed in a fort at Mainz, and commanded by Varus' nephew. They were content to try to hold the Rhine.

Though we can never know why Varus made these mistakes, his reputation for arrogance and over-confidence suggests he underestimated the Germans. But all Rome's previous experience, from Caesar onwards, had shown the Germanic tribes as strong in war.

Upon hearing of the defeat, the Emperor Augustus, according to the Roman historian Suetonius in his work De vita Caesarum (On the life of the Caesars), was so shaken by the news that he stood butting his head against the wall of his palace, repeatedly shouting:

„Quintili Vare, legiones redde!“ ('Quintilius Varus, give me back my legions!')

The three legion numbers were never used again by the Romans after this defeat, unlike other legions that were restructured – a case unique in Roman history.

The battle ended the period of triumphant Roman expansion that had followed the end of the Civil Wars 40 years earlier. Augustus' stepson Tiberius took effective control, and prepared for the continuation of the war. Three legions were sent to the Rhine to replace the lost legions.

Though their shock at the slaughter was great, the Romans began a slow, systematic preparation to reconquer the country. In 14 AD, just after Augustus' death, and the accession of his heir and stepson Tiberius, a huge raid was led by the new emperor's nephew Germanicus.

On a starry night he massacred the Marsi and ravaged their villages with fire and sword. That night the Germans had celebrated; drunk and asleep, they were surprised by Germanicus. The temple of their deity was destroyed.

Several other tribes were roused by this slaughter and ambushed Germanicus on the way to his winter-quarters, but were defeated with heavy losses.

The next year was marked by two major campaigns and several smaller battles with a large army estimated at 55,000–70,000 men, backed by naval forces. In spring 15 AD, the legate Caecina Severus invaded the Marsi a second time with 25,000–30,000 men, causing great havoc.

Meanwhile, Germanicus' troops had built a fort on Mount Taunus from where he marched with 30 to 35,000 men against the Chatti (probably a region of villages) and slaughtered children, women and the elderly. The able-bodied men fled across a river and hid themselves in the forests. After this blow Germanicus marched on Mattium and burned the city down.

In summer 15 AD, the army visited the site of the first battle. According to Tacitus, they found heaps of bones, and skulls nailed to trees, which they buried, "...looking on all as kinsfolk and of their own blood...". Burial pits with remains fitting this description have been found at Kalkriese Hill.

Under Germanicus, the Romans marched another army, with allied Germanic soldiers, into Germania in 16 AD. He was able to fight his way across the Weser near modern Minden, suffering some losses. He forced Arminius' army to stand in open battle at the Weser River. Germanicus's legions inflicted huge casualties on the Germanic armies while sustaining only minor losses.

One final battle was fought at the Angivarian Wall, west of modern Hanover. Again many Germanic soldiers were killed, which forced them to flee. In summer 16 AD, Caius Silius marched against the Chatti with 33,000 men. Germanicus invaded the Marsi for a third time and devastated their land.

With his main goals reached and winter coming, Germanicus ordered his army back to their winter camps, with the fleet getting damaged in a storm in the North Sea. After a few more raids across the Rhine, with the recovery of two of the three Roman legions' eagles lost in 9 AD, Tiberius ordered the Roman forces to halt and withdraw across the Rhine. Germanicus was recalled to Rome and informed by Tiberius that he would be given a Triumph and a new command.

Germanicus' campaign had been to revenge the defeat at Teutoburg, and also partly in reaction to signs of mutiny amongst his troops.

Arminius, who had been considered a real threat to stability by Rome, was now defeated. Once his allied Germanic coalition had been broken and honour avenged, the huge cost and risk of keeping the Roman army operating beyond the Rhine was not worth any likely benefit to be gained.

The last chapter of this story is told by the historian Tacitus. Around 50 AD, bands of Chatti invaded Roman territory and began to plunder (take everything of value). The Roman commander, with a legionary force supported by Roman cavalry and auxiliaries, attacked the Chatti from both sides and defeated them. The Romans were ecstatic when they found Roman prisoners, including some from Varus' legions who had been held by the Chatti for 40 years.

The battle, and the histories of Tacitus, had a big effect on 19th century German nationalism. In the 19th century the Germans were still divided into many German states, but they linked themselves with the Germanic tribes as shared ancestors of one "German people".

In 1808, the German author Heinrich von Kleist's play Die Hermannsschlacht aroused anti-Napoleonic sentiment, even though it could not be performed under French occupation.

Later, the figure of Arminius was used to represent the ideals of freedom and unification – as supported by German liberals, and opposed by reactionary rulers. A memorial – the Hermannsdenkmal – was begun during this period, and Arminius became a symbol of Pan-Germanism. The monument remained unfinished for decades, until after the Franco-Prussian War of 1870–71 unified the country. The completed monument was then a symbol of conservative German nationalism.

All content from Kiddle encyclopedia articles (including the article images and facts) can be freely used under Attribution-ShareAlike license, unless stated otherwise. Cite this article:
Battle of the Teutoburg Forest Facts for Kids. Kiddle Encyclopedia.