View (from top of Frankfurt) of Altkoenig and Grosser Feldberg

The Taunus is a mountain range in Hesse, Germany. It is bounded by the river valleys of Rhine, Main and Lahn. On the opposite side of the Rhine, the mountains are continued by the Hunsrück. The mountains themselves span the districts of Hochtaunuskreis, Main-Taunus, Rheingau-Taunus, and Rhein-Lahn.

Not to be confused with the more famous and high Feldberg in Black Forest, the highest peak is the Großer Feldberg (878 m above sea level). It is followed by the Kleiner Feldberg and the Altkönig (798 m) with the remains of a late Iron Age hill fort (La-Tène A, ca. 400 BC) near the summit.

The Roman Limes was built across the Taunus. The Saalburg, a restored Roman castellum, now houses a museum. After the fall of the Limes (in 259/260 AD), the Alamanni settled here. 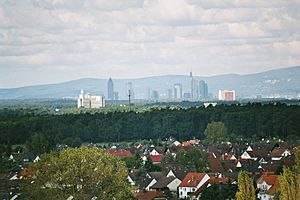 Frankfurt am Main, with the Taunus Mountains in the background 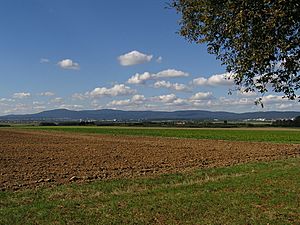 The Taunus with the Feldberg, view from Karben

All content from Kiddle encyclopedia articles (including the article images and facts) can be freely used under Attribution-ShareAlike license, unless stated otherwise. Cite this article:
Taunus Facts for Kids. Kiddle Encyclopedia.