Frontiers of the Roman Empire facts for kids 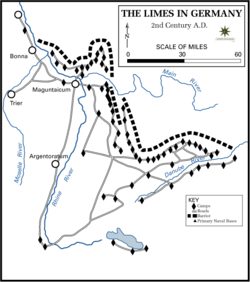 The Limes Germanicus
in the second century AD

Limes (plural: 'Limites') is the Latin name of walls at the border of the Roman empire. There were many such fortifications.

The Latin word has a number of meanings, but the most common one is border.

The term limes was used by Roman writers to describe paths, walls, boundary stones, rivers marking a boundary, but its meaning was not the same as the modern boundary.

Some notable examples of Roman limites are:

All content from Kiddle encyclopedia articles (including the article images and facts) can be freely used under Attribution-ShareAlike license, unless stated otherwise. Cite this article:
Frontiers of the Roman Empire Facts for Kids. Kiddle Encyclopedia.