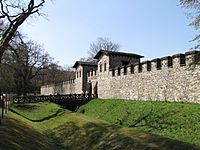 The Saalburg is a Roman fortification in the Taunus mountains in Germany and was a stronghold in the Upper Germanic Limes.

It was constructed about 90 CE and enlarged until about 210. Then the Romans left it after 260. It is estimated that it was home to a cohors equitata, about 500 cavalry and infantry, to protect the access to the Rhine-Main valley from the Germanic tribes in the North. Eventually it decayed, and its stones were used as a quarry.

In 1897 Wilhelm II ordered that it was rebuilt. Today the Saalburg houses a museum and is a center for Roman archeology. It is located between Bad Homburg and Wehrheim, some 30 km north of Frankfurt am Main.

As part of the Upper Germanic Limes the Saalburg belongs to the UNESCO World Heritage sites since 15. July 2005.

All content from Kiddle encyclopedia articles (including the article images and facts) can be freely used under Attribution-ShareAlike license, unless stated otherwise. Cite this article:
Saalburg Facts for Kids. Kiddle Encyclopedia.