Ethnography is a kind of anthropology. Ethnographers study specific cultures.

Ethnography mostly uses participant observation. The researcher becomes part of the setting or mixes with the people being studied. They try to record patterns of social interaction and the thoughts and experiences of participants. Ethnographers want to understand these in their local contexts. Ethnography started in social and cultural anthropology in the early twentieth century. It spread to other social sciences, especially sociology.

Ethnographers mainly use qualitative methods. They may also use quantitative data.

According to Dewan (2018), ethnographers do not try to find generalized results. They study cultures in context and in a specific situation. The best way to use ethnography with quantitative research is to discover relationships. Then, use the results and data to test and explain empirical assumptions. 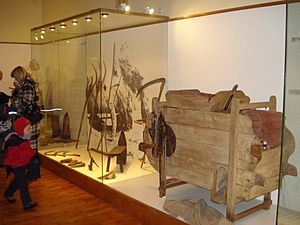 All content from Kiddle encyclopedia articles (including the article images and facts) can be freely used under Attribution-ShareAlike license, unless stated otherwise. Cite this article:
Ethnography Facts for Kids. Kiddle Encyclopedia.