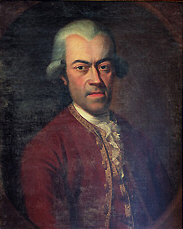 August Ludwig von Schlözer (5 July 1735 — 9 September 1809) was a German historian. He made many important contributions to the study of the Universal History, and particularly, the History of Russia.

In 1804, Schlözer was ennobled and elected privy councilor by the Russian Tsar Alexander I of Russia

His outlook about the universal history influenced historians as Nikolai Karamzin.

All content from Kiddle encyclopedia articles (including the article images and facts) can be freely used under Attribution-ShareAlike license, unless stated otherwise. Cite this article:
August Ludwig von Schlözer Facts for Kids. Kiddle Encyclopedia.