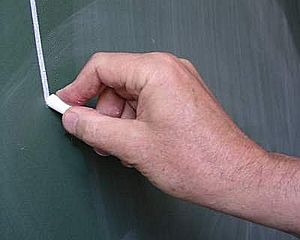 Writing on a blackboard 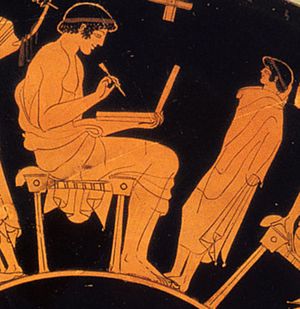 Pedagogy is the art or science of being a teacher.

The word pedagogy comes from the Greek word paidagōgeō, which means "to lead the child." In Ancient Greece, it was usually a slave who helped his master's son get an education. The slave would bring the master's son to school and carry his school things for him, such as a musical instrument.

An academic degree is sometimes given for pedagogy. In the United States of America and Great Britain, you can earn a degree in education at the Bachelor's (undergraduate; BA or BS) or Master's (graduate; MA or MS) level. You can also earn an advanced degree called either a Doctor of Education (Ed.D.), or a Doctor of Philosophy (Ph.D.); you can also get a degree for specific things, like a Doctor of Music degree in piano pedagogy.

All content from Kiddle encyclopedia articles (including the article images and facts) can be freely used under Attribution-ShareAlike license, unless stated otherwise. Cite this article:
Pedagogy Facts for Kids. Kiddle Encyclopedia.