Margaret Mead (December 16, 1901 – November 15, 1978) was an American cultural anthropologist who featured frequently as an author and speaker in the mass media during the 1960s and 1970s. She earned her bachelor's degree at Barnard College in New York City and her M.A. and Ph.D. degrees from Columbia University. Mead served as President of the American Association for the Advancement of Science in 1975.

Mead was a communicator of anthropology in modern American and Western culture and was often controversial as an academic. 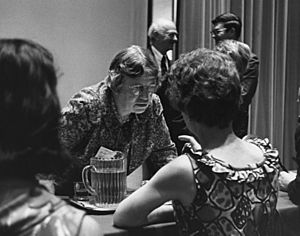 During World War II, Mead served as executive secretary of the National Research Council's Committee on Food Habits. She served as curator of ethnology at the American Museum of Natural History from 1946 to 1969. She was elected a Fellow of the American Academy of Arts and Sciences in 1948. She taught at The New School and Columbia University, where she was an adjunct professor from 1954 to 1978 and was a professor of anthropology and chair of the Division of Social Sciences at Fordham University's Lincoln Center campus from 1968 to 1970, founding their anthropology department. In 1970, she joined the faculty of the University of Rhode Island as a Distinguished Professor of Sociology and Anthropology.

Following Ruth Benedict's example, Mead focused her research on problems of child rearing, personality, and culture. She served as president of the American Anthropological Association in 1960. In the mid-1960s, Mead joined forces with communications theorist Rudolf Modley, jointly establishing an organization called Glyphs Inc., whose goal was to create a universal graphic symbol language to be understood by any members of culture, no matter how primitive. In the 1960s, Mead served as the Vice President of the New York Academy of Sciences. She held various positions in the American Association for the Advancement of Science, notably president in 1975 and chair of the executive committee of the board of directors in 1976. She was a recognizable figure in academia, usually wearing a distinctive cape and carrying a walking-stick.

Mead was featured on two record albums published by Folkways Records. The first, released in 1959, An Interview With Margaret Mead, explored the topics of morals and anthropology. In 1971, she was included in a compilation of talks by prominent women, But the Women Rose, Vol.2: Voices of Women in American History.

She is credited with the pluralization of the term "semiotics."

In later life, Mead was a mentor to many young anthropologists and sociologists, including Jean Houston.

In 1976, Mead was a key participant at UN Habitat I, the first UN forum on human settlements.

All content from Kiddle encyclopedia articles (including the article images and facts) can be freely used under Attribution-ShareAlike license, unless stated otherwise. Cite this article:
Margaret Mead Facts for Kids. Kiddle Encyclopedia.