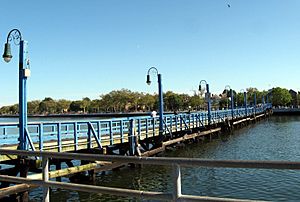 Sheepshead Bay is a bay separating the mainland of Brooklyn, New York City, from the eastern portion of Coney Island, the latter originally a barrier island but now effectively an extension of the mainland with peninsulas both east (the neighborhood of Manhattan Beach) and west (the neighborhoods of Coney Island and Sea Gate). The mouth of the bay is about 1.0 mile (1.6 km) southwest of Marine Park, Brooklyn. The area is part of Brooklyn Community Board 15 and lies east of Gravesend and south of Midwood. 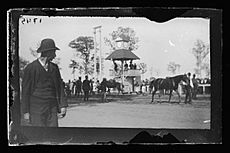 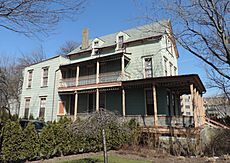 Many bungalows like this were built in the 1920s 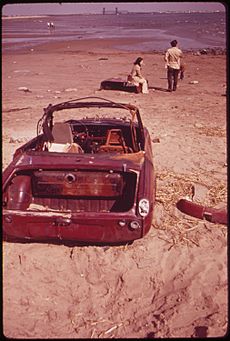 The name "Sheepshead Bay" applies to the neighborhood north of the bay as well as the bay itself. Sheepshead Bay was named for the sheepshead, an edible fish found in the bay's waters. The fish, now rare, can still be caught in the local waters occasionally.

The bay itself was originally the easterly entrance to Coney Island Creek, but the filling-in of the central part of this waterway during the 1930s, in conjunction with construction of the Shore Parkway portion of the Belt Parkway, eliminated access to that waterway. At the same time, the bay was widened, deepened, and bulkheaded at its western end. Recreational fishing fleets are now located there, though the fishing fleets have been shrinking every year and are being replaced by dinner boats. Holocaust Memorial Park, located at the western end of the bay, is used throughout the year for commemorative events.

In the last decade of the 20th century, a real estate boom brought the reopening of the landmark Lundy Brothers seafood restaurant, which closed again in 2007; a grocery store now takes its place. Soviet-style restaurants/nightclubs, such as Paradise and Baku Palace, have opened along the waterfront, due to an influx of immigrants from countries comprising the former Soviet Union. Sheepshead Bay has also experienced a growth of condominium developments, and on Emmons Avenue, the northern shoreline street along the bay, are piers boasting an active seafood market and tour boats.

As of 2007, there were 123,181 people living in the Sheepshead Bay neighborhood. The demographics were 75.4% White, 14.6% Asian, 6.6% Hispanic or Latino, 4.7% African American and 0.2% Native American. Brooklyn's Avenue U Chinatown, which emerged as the second Chinatown of Brooklyn during the late 1990s, is located partially in Sheepshead Bay and partially in nearby Homecrest.

Much like the adjacent Brighton Beach neighborhood, Sheepshead Bay is known for its high concentration of immigrants from the former Soviet Union. Other ethnic groups in the area include Albanians, Chinese, Turks and Hispanics. 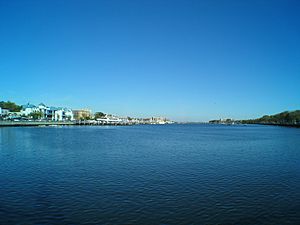 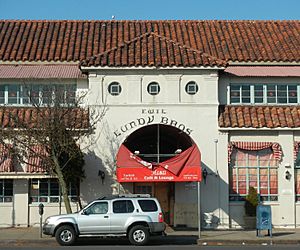 Minor damage due to Hurricane Sandy 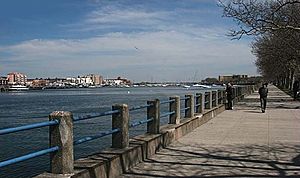 The main shopping and business thoroughfares are Emmons Avenue, Sheepshead Bay Road, Ocean Avenue, and Nostrand Avenue. Emmons Avenue is at the west end of the shore Greenway which lies between Shore Parkway and Jamaica Bay, connecting eastward and northward to Canarsie and Cross Bay Boulevard. Emmons Avenue is a waterfront road with piers from which yachts and boats offer day trips for fishing and dancing.

Madison is a purely residential subsection of Sheepshead Bay, located just south of Midwood. Named after its own James Madison High School, its borders are Kings Highway to the north, Avenue U to the south, Ocean Avenue to the west, and Nostrand Avenue to the east. Madison uses the ZIP code 11229. The area is served by Brooklyn Community Board 15.

All content from Kiddle encyclopedia articles (including the article images and facts) can be freely used under Attribution-ShareAlike license, unless stated otherwise. Cite this article:
Sheepshead Bay, Brooklyn Facts for Kids. Kiddle Encyclopedia.