Avenue U facts for kids

Kids Encyclopedia Facts
For other uses, see Avenue U (disambiguation). 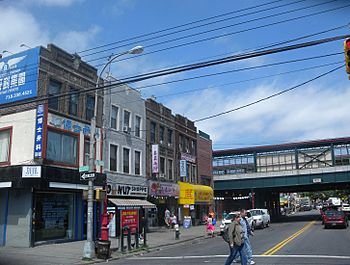 Avenue U is a street located in Brooklyn, New York City, United States. This avenue is a main thoroughfare throughout its length. Avenue U begins at Stillwell Avenue in Gravesend and ends at Bergen Avenue in Bergen Beach, while serving the other Brooklyn neighborhoods of Homecrest, Sheepshead Bay, Marine Park, and Mill Basin along its route.

Avenue U in Homecrest now supports southern Brooklyn's second Chinatown (唐人街, U大道), as evidenced by the rapidly growing number of Chinese food markets, bakeries, restaurants, beauty and nail salons, and computer and consumer electronics dealers between Coney Island Avenue and Ocean Avenue. Since 2004, the Q train on the BMT Brighton Line goes to Canal Street in the Manhattan Chinatown (紐約華埠) to Brooklyn's Avenue U Chinatown directly. (The area was formerly served by M, and D trains, which did go to Manhattan's Chinatown, albeit at different times at different stations, Canal Street on the M Train, Grand Street on the D Train) A third Chinatown has subsequently emerged in southern Brooklyn, in Bensonhurst (唐人街, 本森社区), served by the D train.

This Chinatown on Avenue U is actually a second extension of Manhattan's Chinatown, after the original Brooklyn Chinatown (布鲁克林華埠), which had developed in Sunset Park. Within a sixteen-year period, the Chinese population multiplied by an estimated fourteen fold. The increasing property values and congestion in Brooklyn's first established Chinatown on 8th Avenue in Sunset Park led to the still increasing Chinese population in Brooklyn pouring into the Sheepshead Bay and Homecrest sections, which in the late 1990s resulted in the establishment of a second Chinatown on Avenue U between the Homecrest and Sheepshead Bay sections.

The Avenue U Chinatown is now in expansion mode, despite originating initially from less than ten blocks, originally resembling Manhattan's Chinatown in the late 19th and early 20th centuries, when that Chinatown was still in the early stages of its development, and concentrated within a ten-block section of Mott, Doyers, and Pell Streets.

The Chinese residents call Avenue U in Chinese translation U大道 and call Sheepshead Bay 羊头湾. Just outside this Chinese enclave, also on Avenue U, there is a Chinese supermarket named New York Mart. The East West Bank currently serves as the largest Chinese financial institution for the Avenue U Chinatown.

This newly emerging Chinese enclave and as well as in sections of Bensonhurst are primarily Cantonese populated and more of extensions of the Western Cantonese section of Manhattan's Chinatown or Little Hong Kong (小香港)/Little Guangdong (小廣東) or Cantonese Town (粵語埠). However, there are small numbers of Fuzhou and Mandarin speakers.

Though Brooklyn's Avenue U has the largest Chinese population in all of New York City, the street itself is a filled evidence of other cultures. The Cantonese influence is visibly laced throughout the shops and restaurants on Avenue U. In addition, there are Italian, Mexican, Russian, Vietnamese, Uzbek, and more markets and restaurants scattered along the street. Culturally, Avenue U has hosted more than Chinese immigrants, moving from Jewish to Irish and Italian to Russian to Chinese and Mexican immigrants alike. With each wave of new immigrants, the old culture will find a new place within New York to settle.

Middle-class immigrants populate Gravesend, one section in which Avenue U is located. As of 2008, these immigrants pay upward of $600,000 to live close to their relatives. Jewish, Irish, and Italian families most of all populate the Sephardic community. At the same time, Chinese, Mexican, Russian, and Lebanese immigrants also live in Gravesend.

There are three New York City Subway stations in Brooklyn named Avenue U:

The B3 bus operates on Avenue U for its entire length, except from 86th Street to Stillwell Avenue and from East 71st Street to Bergen Avenue.

All content from Kiddle encyclopedia articles (including the article images and facts) can be freely used under Attribution-ShareAlike license, unless stated otherwise. Cite this article:
Avenue U Facts for Kids. Kiddle Encyclopedia.