Avenue U is a local station on the BMT Sea Beach Line of the New York City Subway, located at the intersection of Avenue U and West Seventh Street in Gravesend, Brooklyn. It is served by the N train at all times and several W trains during rush hours. 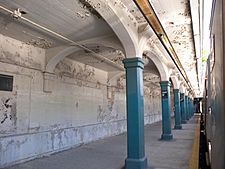 The southbound platform prior to its renovation

This station opened on June 22, 1915, along with the rest of the Sea Beach Line.

In 2005, the station was listed on the National Register of Historic Places.

This station has four tracks and two side platforms. The two center express tracks are not normally used, but both are available for rerouted trains. The platforms are in an open cut. The concrete walls and columns are painted beige (prior to renovations the columns were blue-green). Alternating columns display the standard black station name plate with white lettering.

The 2018 artwork at this station is "Edges of a South Brooklyn Sky", a series of 14 glass mosaics made by Sally Gil. The artwork represent the local community of Gravesend and the diversity of its residents.

This station has two entrances, both of which are beige station houses at street-level between West Seventh and West Eighth Streets above the tracks and have a single staircase leading to each platform at either ends. The main exit at the south end has a turnstile bank and token booth and leads to Avenue U while the exit at the north end leads to Avenue T and is un-staffed, containing just HEET turnstiles and exit-only turnstiles.

All content from Kiddle encyclopedia articles (including the article images and facts) can be freely used under Attribution-ShareAlike license, unless stated otherwise. Cite this article:
Avenue U station (BMT Sea Beach Line) Facts for Kids. Kiddle Encyclopedia.